Carlos Sainz said contract talks with Ferrari had gone smoothly, after his multi-year deal was announced before the team's first home race of the season at Imola - with teammate Charles Leclerc adding that the move to sign Sainz was wholly positive for the Scuderia. 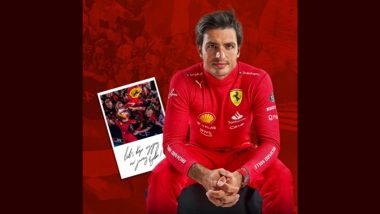 Imola (Italy), April 22 : Carlos Sainz said contract talks with Ferrari had gone smoothly, after his multi-year deal was announced before the team's first home race of the season at Imola - with teammate Charles Leclerc adding that the move to sign Sainz was wholly positive for the Scuderia. Sainz, who like Leclerc is now contracted to drive for Ferrari until 2024, had his multi-year deal announced on Thursday ahead of the first Sprint weeekend of 2022 at Imola.

The Spanish driver was asked whether there were any hitches in getting the contract signed. "Super-straightforward, to be honest - it's been easygoing I guess; after such a good first year that we had, just getting it agreed. was fairly easy for both parties, and I guess just now having the opportunity to announce in a place like Imola, in front of the tifosi on a weekend like this, I think it was ideal. We put together a good plan for the announcement being here also," he said. IPL 2022: Aaron Finch Admires the Way Kolkata Knight Riders Work

He added that stability was 'key' for him after he spent two years at McLaren. This contract will see Sainz stay at least four years with the Scuderia, which will be his longest stint at a single team in F1. "Well I think (stability is) key; I think it's no secret recently that not only me but I think you've heard also other drivers saying it's important on the driver's side to have their full focus on the performance, on the racing, and not having to focus too much on what the future holds.

"For me, I've since I discovered this when I raced for McLaren - I've been very vocal towards it. Honestly, I've been pretty sure all winter that we were going to secure this so it's not like I was worried in the first three races - but it always gives you an extra bit of a push." Team mate Leclerc, on a similar deal with Ferrari, was happy that his squad had tied Sainz down so early in the season as they look to win a first title since 2008.

"I'm very happy. Obviously Carlos is a great guy other than just a very good driver too, and we have a very good relationship. We also work together very well but I think what is the most important is that we also have the same feedback," Leclerc said. "We need the same things from the car but this is extremely important for the future of the team, for us to both push in the same direction. This has been the case for the last year and a half and I think we are already seeing the benefits. So yes, having Carlos in the team for the next two years is great." Mike Tyson Punches Airline Passenger, Video Goes Viral

Like Sainz, Leclerc said that stability is crucial to a driver's ability to perform at the highest level and avoid the distraction of ongoing contract discussions. "It's very important, I think, for many reasons - obviously I know this because I have signed a very long contract with Ferrari and to know that you are in the same place for many years to come is great for the confidence, for feeling good mentally, and obviously being able to work in the long-term, which always has its benefits," he concluded.

(The above story first appeared on LatestLY on Apr 22, 2022 03:39 PM IST. For more news and updates on politics, world, sports, entertainment and lifestyle, log on to our website latestly.com).