Italian Open 2022: Novak Djokovic Moves to Third Round With Win Over Aslan Karatsev

Novak Djokovic's bid to retain his World No 1 status got a boost on Tuesday after he registered a comfortable 6-3, 6-2 victory over Russian Aslan Karatsev in the second round of the Italian Open, here. 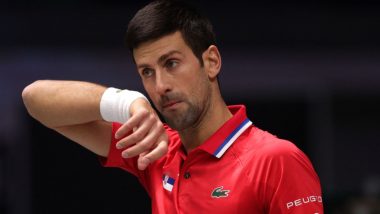 Rome, May 10: Novak Djokovic's bid to retain his World No 1 status got a boost on Tuesday after he registered a comfortable 6-3, 6-2 victory over Russian Aslan Karatsev in the second round of the Italian Open, here. The top seed must reach the semi-finals to prevent Daniil Medvedev from taking his spot at the top of the ATP Rankings on Monday, and the Serbian's all-round performance against Karatsev represented an impressive start to that mission. Injured Carlos Alcaraz and Naomi Osaka Withdraw from Italian Open 2022.

Djokovic's return game was at its relentless best as he broke the World No 35 serve four times on his way to a comfortable win on centre court. "When you see him, physically, (he is) a very strong guy. You never know with him. If he's feeling the ball, he can be very dangerous because he stays so close to the line, puts pressure on his opponents," Djokovic said about Karatsev, after the match. "He was missing a lot of balls today though. He gave me a couple of breaks there in the first and second sets, but I'll take this win for sure. It's a straight-sets win against a quality opponent and I'm looking forward to the next challenge," he added.

Karatsev had beaten Djokovic in his hometown of Belgrade in the pair's sole previous meeting on clay at the 2021 Serbia Open. The World No 35 dropped his opening service game at the Foro Italico but broke back immediately, a demonstration of the threat his high-powered game can pose. The three-time ATP Tour titlist could not hold off Djokovic for long, however, as the Serbian broke again in the eighth game on his way to the opening set. The second set was more straightforward for Djokovic, who surged to a 4-0 lead as Karatsev struggled to make any real impact against his accurate delivery. The Serbian had no issues serving out to complete victory in 91 minutes and move into a 2-1 ATP Head to Head series lead over Karatsev. Johanna Konta, Former British No. 1, Announces Pregnancy, Flaunts Baby Bump.

Prior to the match Djokovic spoke of the physical improvements he felt during his run to the semifinals at last week's Madrid Open after a difficult start to 2022. Although the quickfire nature of his victory meant the 37-time Masters 1000 champion's stamina was not severely tested against Karatsev, his outstanding defensive game appeared back to its imperious best. Djokovic will look to maintain that form for his third-round clash against fellow Serbian Laslo Djere or former World No 3 Stan Wawrinka, as he chases a maiden title for 2022 in the Italian capital.

(The above story first appeared on LatestLY on May 11, 2022 10:35 AM IST. For more news and updates on politics, world, sports, entertainment and lifestyle, log on to our website latestly.com).