WWE Super ShowDown 2020 which took place at Riyadh in Saudi Arabia shocked fans around the world. We just can't believe our eyes to see that Goldberg has become the new WWE Universal Champion. This victory was reminiscent of Goldberg's dominant era in World Championship Wrestling (WCW). 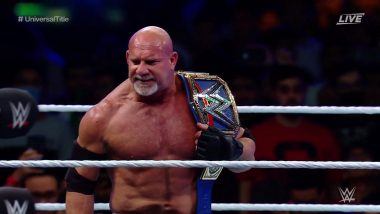 WWE Super ShowDown 2020 which took place at Riyadh in Saudi Arabia shocked fans around the world. We just can't believe our eyes to see that Goldberg has become the new WWE Universal Champion. This victory was reminiscent of Goldberg's dominant era in World Championship Wrestling (WCW). Goldberg delivered jackhammer to The Fiend Bray Wyatt for pinning him to the count of three. Before that, we saw Goldberg giving a total of four spears to The Fiend.  Apart from that, we saw Brock Lesnar brutally thrashed Ricochet to emerge victorious over him. The Beast Incarnate hardly took a minute or two to defeat Ricochet to retain his WWE Championship. Meanwhile, you have arrived at the right platform, if you are looking for results and highlights of WWE Super ShowDown 2020. The Undertaker Returns at WWE Super ShowDown 2020; Deadman Pins AJ Styles to Win Tuwaiq Trophy (View Pics)

With Brock Lesnar defeating Ricochet, it is confirmed that he will face Drew McIntyre for WWE Championship title match at WrestleMania 36. That's not all, we also saw the return of The Undertaker at WWE Super ShowDown 2020. Deadman first took The OC before entering the ramp. He appeared during Tuwaiq Trophy gauntlet match where he pinned AJ Styles by giving a chokeslam. With this victory, The Undertaker wins Tuwaiq Trophy. WWE Raw February 24, 2020 Results and Highlights: Becky Lynch Gets into Brawl With Shayna Baszler During Contract Signing for Women’s Elimination Chamber Match (View Pics & Videos)

We also witnessed Roman Reigns defeat King Baron Corbin in a steel cage match, where The Big Dog gave superman punch to his opponent to earn the victory. Bayley creates history by emerging victorious in the first-ever women's title match in Saudi Arabia where she defeated Naomi. John Morrison and The Miz became new SmackDown Tag Team Champions as they defeated The New Day. However, Raw division Tag Team Champion Seth Rollins and Buddy Murphy successfully defended their title against The Street Profits.

Goldberg is The New Champion

The #Undertaker has returned to #WWESSD and has won the Prestigious Tuwaiq Mountain Trophy!!

It will be interesting to see how long Goldberg title reign will last. In the upcoming episode of SmackDown, we will also see how The Fiend Bray Wyatt reacts to his defeat. Also, John Cena will make his return on this coming week SmackDown episode. Stay tuned with LatestLY for more updates and news from WWE.

(The above story first appeared on LatestLY on Feb 28, 2020 03:06 AM IST. For more news and updates on politics, world, sports, entertainment and lifestyle, log on to our website latestly.com).