Apple is expected to announce the iPhone 14 series in or around September and now a new report suggests the Pro models would come with a big camera upgrade. 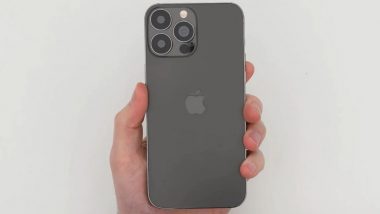 San Francisco, Jan 13: Apple is expected to announce the iPhone 14 series in or around September and now a new report suggests the Pro models would come with a big camera upgrade.

Current Pro iPhones ship with a 12MP camera on board. However, iPhone 14 Pro models will feature a 48MP camera.

According TrendForce, a 48 million pixel primary camera is expected to be introduced to the iPhone 14 Pro series (tentative name) that Apple will release this year, further reducing 12 million pixel products to a 15 per cent share in 2022. Sennheiser Launches New Headphone HD 450SE in India at Rs 14,990.

Recently, Apple analyst Ming-Chi Kuo also claimed that the 2022 iPhone 14 Pro and 14 Pro Max would be shifting over to a hole-punch cutout for the camera.

Apple has reportedly advised major US carriers to prepare for the launch of eSIM-only smartphones by September this year.

It is possible that Apple might remove the physical SIM card slot starting with some iPhone 14 models, rather than some iPhone 15 models as originally rumoured.

It is also said that there will be support for two eSIM cards, ensuring dual SIM functionality. The removal of the SIM card slot could further improve water resistance.

The next flagship series, the iPhone 14 line-up, will come with up to 2 TB of storage.

Apple will adopt QLC flash storage for next year's iPhone and that, thanks to the newer storage technology, it will increase capacity to 2 TB.

(The above story first appeared on LatestLY on Jan 13, 2022 05:01 PM IST. For more news and updates on politics, world, sports, entertainment and lifestyle, log on to our website latestly.com).