Google Celebrates 23rd Birthday: Fun Facts About Google That You Do Not Have To Google Search!

There is no questioning the way that access to power has impacted the world and helped us all be educated about everything that's happening. There are definitely various challenges that still stand in our way, but Google has fairly captured the access to information. 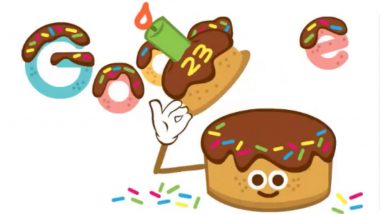 There are few things that get us through our everyday life, and on the top of the list has to be Google. This is a fact, and you can google it. The search engine, which has been making our lives easier for decades now, turns 23 on September 27. And the celebration of Google's birthday is already filled with great fervour and enthusiasm. From adorable Doodle for its birthday to a unique treasure hunt for its users, Google has planned various things to make this 23rd birthday party memorable. And as we all wish Happy Birthday to Google, here are some facts you need to know about this company!

1. When is Google's Birthday

While we are undoubtedly celebrating Google's Birthday on September 27, this is actually just a date of convenience. The actual birthday of Google is rather tricky to understand. A quick search will tell you that the company was actually founded on September 4, 1998. In the initial years, it celebrated its birthday on September 7; however, the date September 27 was finalised in 2005 to commemorate the day that they made an announcement of a record number of pages that the search engine was indexing. However, it has only been since its eighth birthday that Google's birthday has been on September 27!

Two computer science students just so happened to build a search engine in their dorm rooms in 1998.

Today, we’re blowing out 23 candles in our room 🤭🎂 #GoogleDoodle pic.twitter.com/xYSdpCl9vV

2. The Origin of the Name – Google

If we tell you that the original name of Google was Backrub, would you believe us? Well, that's the truth. However, they finally settled on Google, which is a mis-spelling of Google. What is Google or Googol, you ask? Well, it is the mathematical term for one with a hundred zeros (just about all the information that Google makes accessible to all of us.)

When it comes to being a search engine, nobody does it better than Google. The brand is said to have more than 90% market share as a preferred search engine!

4. The Sheer Reach of Google

The use of Google has only been on the rise as more and more people have access to the internet and smartphone. So much so that there are more than one billion searches on Google every day today. And all the searches are available in more than 150 languages, making them accessible to millions, irrespective of their language preference.

5. The Story That Could Have Been

It is said that the founders of Google were actually not interested in starting their own company. They wanted to sell their search engine system to Yahoo for USD 2 million. However, the company declined. What is interesting to note is that Yahoo tried to buy Google in 2002 for USD 3 billion, and today, Google is valued at more than 450 billion US dollars!

There is no questioning the way that access to power has impacted the world and helped us all be educated about everything that's happening. There are definitely various challenges that still stand in our way, but Google has fairly captured the access to information, and for that and everything else, we are forever grateful. Here's wishing to Google a Happy Birthday!

(The above story first appeared on LatestLY on Sep 27, 2021 09:02 AM IST. For more news and updates on politics, world, sports, entertainment and lifestyle, log on to our website latestly.com).