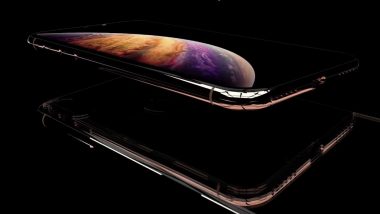 Apple is all set to launch the new 2018 version of iPhones in the global market today. As per the market reports, it is reported that the American smartphone making company will launch at least 3 new iPhones, which are likely to be christened as iPhone Xs, iPhone XS Max and iPhone Xr. However, there is no still confirmation regarding the same yet. The company will be taking the wraps off today at the 'gather round' event, which is slated to commence at 10 am PDT (10.30 pm IST) in California. Alongside three rumoured iPhones, the company could also reveal new iPads, Apple Watch 4, new MacBook and all-new air-pods. Apple Expected to Unveil Bigger, Pricier IPhone on Wednesday.

Apple iPhone Xs and iPhone Xs Max (Plus): The upcoming Apple iPhone Xs and Xs Max devices are expected to be the main highlight of the launch event tonight. The company is expected to build the introduction of the devices on the success recorded by the predecessor - iPhone that was officially announced last year. There have been several leaks regarding the new iPhone Xs and Xs Max hinting that the devices will carry 5.8-inch and 6.5-inch display panels. Moreover, the iPhone Xs Max or iPhone Xs Plus is likely to be the most significant iPhone ever launched. Both the devices will also carry OLED screens along with edge-to-edge design. It will also sport a notch on the top of the display likewise the predecessor. New Apple iPhones Confirmed to Support Dual SIM 4G Connectivity.

According to the report from TrendForce, the company will launch both the iPhones with 4GB of RAM along with 512GB of onboard storage. Both the devices from Apple will feature a dual camera module at the rear likewise iPhone X. However, the area of improvement will be the front camera with extra hardware for Face ID. A triple camera setup at the back of new iPhone Xs or Xs Max seems to be unlikely.

Moreover, MacRumors recently also reported that iPhone Xs would be packed with a 3400 mAh battery whereas a 2600 mAh battery will back the smaller iPhone Xs. However, there is no confirmation regarding the battery details from the company. Expect more light falling on this aspect at the launch event itself. Watch Live Stream of Apple’s Gather Round Event; Here’s What You Can Expect.

Under the hood, the new iPhones from Apple will be powered by the new A12 chipset, which is the latest SoC on offer from the American smartphone maker. The devices are expected to run iOS 12 out-of-the-box with dual-SIM support. We previously reported that Apple might introduce dual-SIM support to new iPhones. However, this new option from Apple will be limited to China market only. New Apple iPhone XS Colour Options Leaked Online Ahead of the Launch.

Apple iPhone Xr: Alongside two premium iPhones - Xs and Xs Max, Apple is also expected to launch the new iPhone Xr smartphone at the launch event today. Some reports suggest that iPhone Xr could also be called as iPhone Xc. However, the exact name of the device will be confirmed today at the event. The device is expected to pack a 6.1-inch LCD display, unlike iPhone Xs that could bear OLED display. Further speculating, the new iPhone Xr could sport a single camera at the rear, which is believed to be a significant difference. The handset is expected to pack an A12 chipset under the hood, which will be mated to a 2GB RAM. Apple iPhones 9, iPhone Xs & iPhone Xs Max Listed Online for Pre-Orders on a Romanian Website; Prices & Variants Revealed.

(The above story first appeared on LatestLY on Sep 12, 2018 05:06 PM IST. For more news and updates on politics, world, sports, entertainment and lifestyle, log on to our website latestly.com).