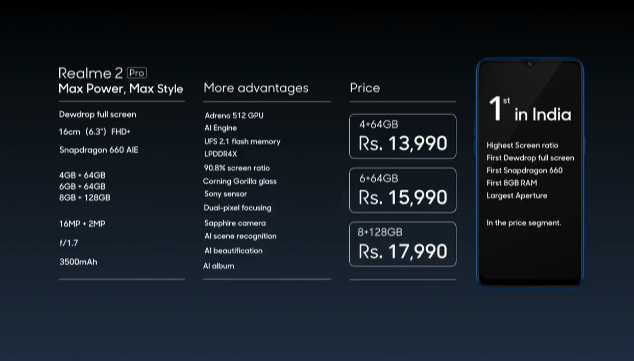 Realme 2 Pro Price
Realme has finally launched the much awaited Realme 2 Pro smartphone in India at Rs 13,990 for the base variant - 4GB and 64GB variant.

Realme 2 Pro Smartphone comes with 16MP dual AI-enabled camera at the rear with Sony IMX398 sensor, F/1.7 aperture and more. The front camera is a 16MP snapper with AI beauty for enhanced selfies.

The new Realme 2 will be retailed online exclusively via Flipkart. The smartphone is expected to fall under the Rs 20,000 price bracket, as it expected to be the best mid-range smartphone.

Realme 2 Pro Variant Specs
The new Realme 2 Pro is offered with 8GB of RAM and 128GB of inbuilt storage. Under the hood, it gets a Snapdragon 660 chipset mated to a Adreno 512 GPU. 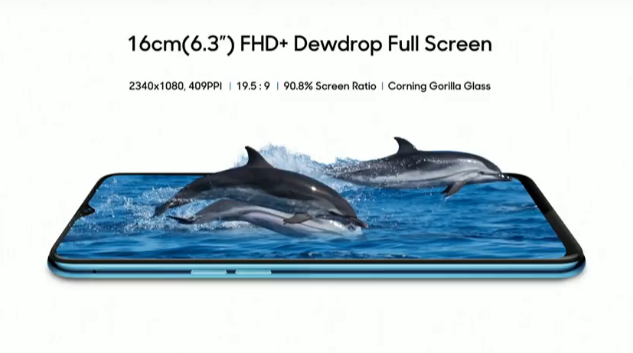 Realme 2 Pro Display Specs
The Realme 2 Pro comes with a 6.3-inch Dewdrop Full Screen FHD+ resolution with 19.5:9 aspect ratio and 2340x1080p of resolution. It also gets Corning Gorilla Glass for all round protection.

Realme with revealing the Realme 2 Pro smartphone today at Amity University, Noida. The launch event is slated to commence at 12.30 PM IST. 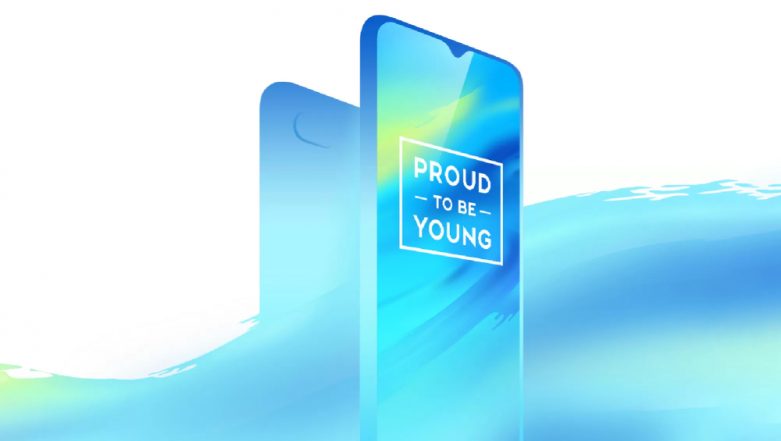 Considering the several rumours and teasers, it is believed that Realme 2 Pro will feature a waterdrop notch with a large, edge-to-edge display. The droplet-shaped notch is the same as the one seen on Oppo F9 Pro. Going by the several rumours, it is believed that Realme 2 Pro is likely to feature a 6.3-inch FHD+ resolution. The rear section of the smartphone is expected to feature a glass or glossy plastic panel along with a fingerprint sensor. Jio Media Cable Launching Soon in India; Connecting JioPhone to Your TV For Streaming Now Possible.

Under the hood, the new Realme 2 Pro device is expected to pack a Snapdragon 660 chipset that could be mated up to 8GB of RAM. However, there are also rumours that the company might launch the 6GB variant as well. The device is also expected to feature a dual camera setup at the back. To run Android Oreo with ColorOS skin on the top, the smartphone is expected to be backed by a 4,230mAh battery.