Samsung India has finally launched the new Galaxy Note 9 Launched in India at Rs 67,900 for the 6GB RAM variant. The 8GB RAM variant is priced at Rs. 84,900.

The internal space on the new Note 9 can be upgraded up to 1TB on the top-end variant by using microSD card.

The India launch event of Galaxy Note 9 is about to commence soon. Stay tuned for more updates from the launch of new Note 9.

Talking about the specs, the North America and China spec models gets Snapdragon 845 SoC whereas the smartphone for other markets comes fitted with a in-house developed Exynos 9810 chipset. 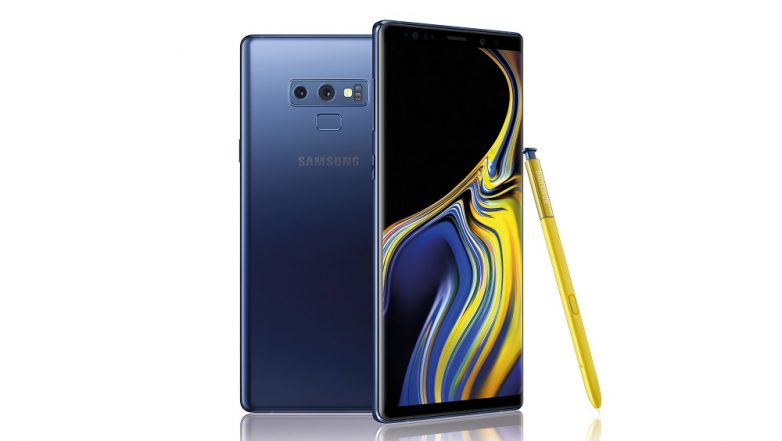 Samsung India will launch the Galaxy Note 9 smartphone in India today. The launch proceedings are slated to commence at 12 PM IST. Stay tuned for more updates from the launch event.

The wait is finally over! Samsung India will be launching the new Galaxy Note 9 flagship smartphone in India today. The launch event is slated to begin at 12.30 PM IST in New Delhi. As a reminder, the company launched the flagship device on the global front earlier this month – August 9 at the unpacked event in New York. Since its global roll out, the Korean smartphone maker has been receiving pre-orders for the new Note 9 in India with a starting price of Rs. 67,900. Moreover, the top-end variant with 8GB RAM and 512GB of inbuilt storage. As per the market reports, it is believed that the 512GB variant of Note 9 is attracting more buyers than the base variant (6GB RAM). Samsung Galaxy Note 9 to Be Launched in India Today at 12.30 PM IST; How to Watch LIVE Streaming of Note 9 Launch Event.

Samsung India is broadcasting the launch event of Galaxy Note 9 and the same can be watched here. Moreover, the launch event will also be streamed online via its official website page. Talking about the specs, the new Note 9 features a 6.4-inch Super AMOLED Infinity display. Powering the device is a newly developed in-house Exynos 9810 chipset, which is coupled to an ARM Mali-G72 GPU along with up to 8GB of RAM and up to 512GB on internal storage that can be increased up to 1TB using microSD card. Xiaomi Pocophone F1 India Launch LIVE News Updates; Price in India, Specifications, Release Date, Colours & More.