Astronomers from Curtin University, as part of an international team, have produced the most comprehensive images of the nearest active black hole to earth. 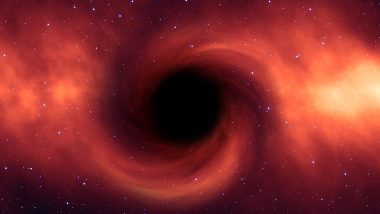 Sydney, December 23: Astronomers from Curtin University, as part of an international team, have produced the most comprehensive images of the nearest active black hole to earth. The discovery, published in the Nature Astronomy journal and released to the public on Thursday, took a deep dive into the black hole at the center of the galaxy Centaurus A, about 12 million light-years away, reported Xinhua news agency.

Despite being galaxies far away, the erupting black hole extended across a length equal to 16 moons placed side by side in the night sky. However, it is not visible to the naked eye. The images were created using the Murchison Widefield Array (MWA) telescope in outback Western Australia, which is able to detect and image emitted radio waves. Three Super-Massive Black Holes Merging Together in Our Nearby Universe, Discovered by Indian Researchers.

"These radio waves come from material being sucked into the supermassive black hole in the middle of the galaxy," said lead author on the study Benjamin McKinley from the Curtin University node of the International Centre for Radio Astronomy Research (ICRAR).

As the black hole that possesses 55 million times the mass of the sun erupts, it feeds on gas and ejects material at near light speed, which causes "radio bubbles" to expand outwards.

"It forms a disc around the black hole, and as the matter gets ripped apart going close to the black hole, powerful jets form on either side of the disc, ejecting most of the material back out into space, to distances of probably more than a million light-years," said McKinley.

McKinley said this is why the images appear brighter in the center, as energy is dissipated as particles are shot out and settle. He said the shape it forms, two connected ovals, is likely the result of particles being re-accelerated by a strong magnetic field.

The research and imaging were made possible by the MWA which Curtin University operates on behalf of ICRAR. "The MWA is a precursor for the Square Kilometre Array, a global initiative to build the world's largest radio telescopes in Western Australia and South Africa," said MWA director Steven Tingay.

(The above story first appeared on LatestLY on Dec 23, 2021 12:01 PM IST. For more news and updates on politics, world, sports, entertainment and lifestyle, log on to our website latestly.com).