China has released landing process footage from its Zhurong rover as well as video and sounds of the vehicle roving on Mars. 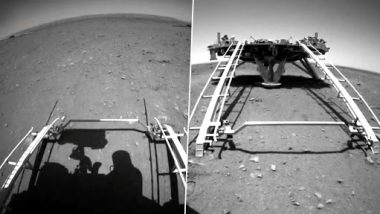 Beijing, June 28: China has released landing process footage from its Zhurong rover as well as video and sounds of the vehicle roving on Mars.

Footage of the entry, descent and landing shows the deployment of a supersonic disk-gap-band parachute, separation of the backshell, followed by powered descent, a hazard-avoidance hover phase and landing, SpaceNews reported on Sunday.

The China National Space Administration (CNSA) published the footage in a Zhurong mission update on early Sunday Beijing time. China to Send 3 Male Astronauts to Its Space Station in June.

Video of the descent of the Zhurong rover from its landing platform, including sounds made by the vehicle's egress, was included in the release.

The sounds were created by the metal on metal interaction of a rack and pinion system and recorded by Zhurong's climate station, which intends to capture sounds of Martian winds.

"With the files, we released this time, including those sounds recorded when our Mars rover left the lander, we are able to conduct in-depth analysis to the environment and condition of Mars, for example, the density of the atmosphere on the Mars," Liu Jizhong, deputy commander of China's first Mars exploration programme, told media.

The 240-kilogram Zhurong rover successfully landed in Utopia Planitia on May 14. The deployment took place late May 21 Eastern, following a week-long series of checks and analysis of the environment.

The six-wheeled, solar-powered Zhurong has since covered 236 meters on the Martian surface, the report said.

An undated panorama shows Zhurong and tracks leading back to the landing platform, along with surface and horizon features, it added.

Zhurong had earlier dropped a remote Wifi camera when still close to the landing platform.A

The rover then returned to pose for a joint selfie with the lander. The new update this time featured footage of Zhurong's drive back to the landing platform and later making a turn.

The rover is part of the Tianwen-1 mission, China's first independent interplanetary mission. Consisting of an orbiter, a lander, and a rover, Tianwen-1 launched in July 2020. It entered Mars orbit on February 10.

(The above story first appeared on LatestLY on Jun 28, 2021 11:47 AM IST. For more news and updates on politics, world, sports, entertainment and lifestyle, log on to our website latestly.com).