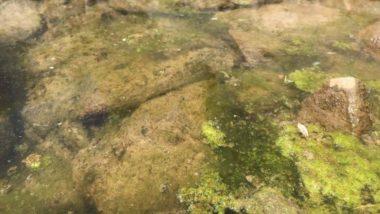 Global warming is causing drastic changes to our planet, including our water bodies and environment. Recently, in the western United States, there was an increase in algae blooms caused as a result of global warming. According to researches at Colorado State University, the concentration of algae in two remote mountain lakes was more than twice in the past 70 years. They opined on Tuesday that the change in colour is "without historical precedent". Pink Ice Cover Italian Alps Due to Growing Algae Caused by Climate Change, May Trigger Melting (See Pictures And Videos)

Their results, published in the British Royal Society journal Proceedings B, highlight the potentially harmful effects of climate change on pristine and remote ecosystems. Lead researcher Isabella Oleksy of Colorado State University told AFP, "Even in relatively remote lakes located in protected areas... the fingerprint of human perturbation of Earth System is evident. Rapid warming of high elevation environments has resulted in the rapid acceleration and dominance of green algae, which until recently were found in low abundance in these lakes. Antarctica Loses Another Big Chunk of Ice; Here 5 Major Ways In Which Glacier Melting Can Affect The Planet.

The scientists led by Oleksy examined algae concentrations in lakes in a mountain range about 100 kilometres from Denver. For the research, they used a tool called gravity corner to collect sediment cores without damaging the lakebed. When compared to the samples in the 1950s, there were some "dramatic changes" in the algae. She said that these large amounts of algae is typically found in highly polluted areas and not in mountain regions.

They said that climate change has caused the excess accumulation of nutrients like phosphorus and nitrogen that caused algal blooms. The United States Environmental Protection Agency says on its website says that the algae blooms in lakes and blooms sicken the wildlife and can even affect the aquatic environments.

50,000-year-old Lonar Lake in Maharastra formed by an asteroid collision with earth, had recently changed its colour from green to pink. While it was earlier believed that the change in colours could be due to the salinity and presence of algae in the water, scientists are now exploring other possibilities.

(The above story first appeared on LatestLY on Jul 08, 2020 11:56 AM IST. For more news and updates on politics, world, sports, entertainment and lifestyle, log on to our website latestly.com).