Twitter has announced a new and improved version of TweetDeck, and is testing new features with a small group of users in the US, Canada and Australia. 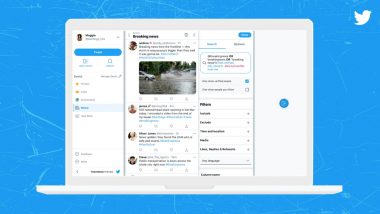 New Delhi: Twitter has announced a new and improved version of TweetDeck, and is testing new features with a small group of users in the US, Canada and Australia. TweekDeck is a social media dashboard which many Twitter users are not aware of, and the company may turn its into a new subscription service in the near future. The company has rolled out a preview of the new and improved version of TweetDeck to a limited number of accounts, with enhanced functionalities. Twitter Rolling Out New Feature That Allows Users To Change Who Can Reply to Their Tweet.

Don’t worry! Your favorite TweetDeck features aren’t going away. Here are some of the new features we’re testing:

👀 Updates to Advanced search help you find the content you're looking for. pic.twitter.com/souZhTSOJF

"We're testing this preview with a small group of randomly-selected people in the United States, Canada, and Australia to start. If you're eligible, you'll see an invitation within TweetDeck to opt in," Twitter announced.

It includes a host of advanced features to help get the most of Twitter: Manage multiple Twitter accounts, schedule Tweets for posting in the future, build Tweet collections, and more. TweetDeck is currently available at tweetdeck.com or the Mac app store.

(The above story first appeared on LatestLY on Jul 21, 2021 01:42 PM IST. For more news and updates on politics, world, sports, entertainment and lifestyle, log on to our website latestly.com).