Twitter Shows Jammu And Kashmir as Part of China When Users Search For Hall of Fame, Leh; Netizens Including Security Analyst Complain Online 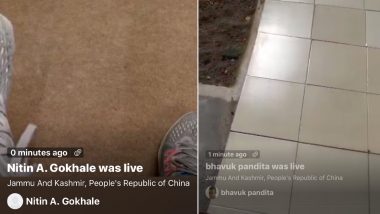 Leh, October 18: Twitter is facing criticism from Indian users after the microblogging website shows the region of Jammu and Kashmir and Ladakh as part of China. On Sunday, security analyst Nitin Gokhale, complained that when he typed Hall of Fame, Leh as location, he received suggestions which showed the union territory of Jammu and Kashmir as part of the People's Republic of China. Gokhale posted the image on his Twitter handle.

The security analyst tweeted, "See this Twitter! When I put Hall of Fame Leh as the location, see what it shows. I tested it deliberately. @Twitter @TwitterIndia @TwitterSupport." Soon, other Indian users, including journalist Kanchan Gupta also complained about the same issue. Twitter users can tag a place in their tweets using the location option. Twitter Bug Disclosed Some iOS Users' Location Data.

See this Twitter! When I put Hall of Fame Leh as the location, see what it shows. I tested it deliberately.@Twitter @TwitterIndia @TwitterSupport pic.twitter.com/sGMbmjJ60c

So @Twitter has decided to reconfigure geography and declare Jammu & Kashmir as part of People's Republic of #China . If this is not a violation of #India laws, what is? Citizens of India have been punished for far less. But US Big Tech is above the law? @nitingokhale @rsprasad pic.twitter.com/euelMvCxTy

Indian Users Complaining About the Same:

@Twitter @TwitterIndia so according to you Leh is a part of People’s Republic of China. @nitingokhale pic.twitter.com/SEelUu5Xx1

The microblogging site made a blunder amid India-China standoff in Ladakh. Notably, China did not recognise union territory status granted to Ladakh by the Indian government in August last year. The armies of both nations are locked in a standoff since April this year. The situation in eastern Ladakh deteriorated after around 250 Chinese and Indian soldiers were engaged in a violent face-off on the evening of May 5. Several Indian and Chinese soldiers were injured in the violence. Twitter Removes Precise Location Tagging on Its App.

The incident in Pangong Tso was followed by a similar incident in North Sikkim on May 9. On June 15, tensions accelerated between both the countries after 20 Indian soldiers were martyred in violent clashes with PLA troops in Galwan Valley. Chinese Army also suffered casualties. However, the exact number is not revealed by the Chinese government.

(The above story first appeared on LatestLY on Oct 18, 2020 01:58 PM IST. For more news and updates on politics, world, sports, entertainment and lifestyle, log on to our website latestly.com).