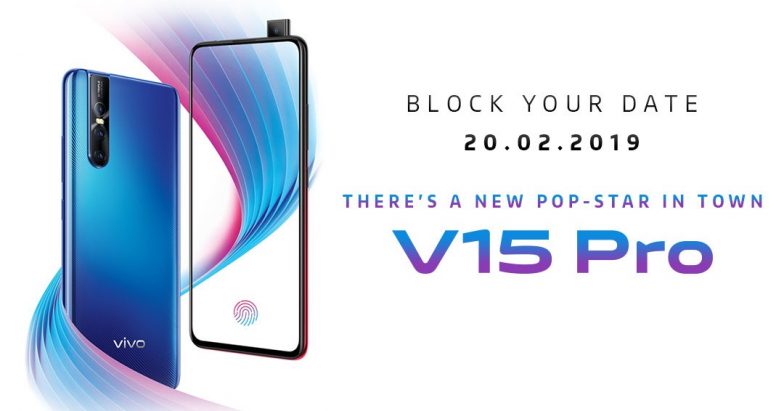 Vivo, the Chinese smartphone manufacturing company has confirmed the launch date of the forthcoming Vivo V15 Pro and Vivo V15 smartphones in India. The company will be launching the new smartphones on February 20, which was confirmed via official Twitter handle. Likely to be introduced as a successor to Vivo V11 Pro, the new Vivo V15 Pro will be company’s second handset to feature pop-up camera, first being the Vivo Nex.  However, Vivo NEX featured only an 8MP pop-up camera. Vivo V15 Pro, V15 Smartphones To Be Launched in India on February 20; India Prices, Specifications & Features Revealed.

The company will be launching the new devices ahead of the MWC 2019. In a recent interview, a Vivo executive confirmed that Vivo V15 Pro will be priced in the range of Rs 20,000 to Rs 30,000. Not much details about the smartphone have been revealed yet. Expect more details and specifications coming out ahead of the launch.

Going by the listing on Amazon India website, the Vivo V15 Pro is expected to come with a triple rear camera setup comprising 48MP quad pixel primary sensor to produce 12MP effective images. Though Vivo hasn’t announced the specifications of the camera, it is believed that the company might employ Samsung’s GD 32MP image sensor with HDR and electronic image stabilisation (EIS). Moreover, a next-generation in-display fingerprint sensor could be offered on the device.

The company also released a teaser video of the smartphone earlier this week. When launched in the domestic market, the Vivo V15 Pro will take on Nokia 8.1 and Samsung Galaxy A9 (2018) smartphone in the segment. Expect more details coming out in the market about the device.