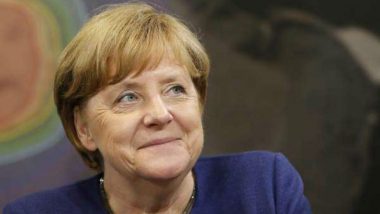 "I am delighted to have received my first vaccination with AstraZeneca today. I thank everyone involved in the vaccination campaign -- and everyone who gets vaccinated. Vaccination is the key to overcoming the pandemic," Merkel was quoted as saying, Xinhua news agency reported.

The AstraZeneca vaccine is now only recommended for people aged over 60 in Germany. Its use for younger people remained optional at doctors' discretion for people without an increased risk of blood clots. The chancellor is 66 years old and thus falls into the group of those eligible for AstraZeneca vaccine in Germany. Oxford-AstraZeneca COVID-19 Vaccine Suspension: European Countries' Decision More Political Than Scientific? Report Says Pfizer Vaccine Has More Blood Clot Cases.

Over three and a half months after the start of the Covid-19 vaccination program in Germany, more than 5.3 million people had been fully vaccinated as of Thursday, bringing the country's vaccination rate to 6.4 percent, according to the Robert Koch Institute (RKI), the federal government agency for disease control and prevention.

As of Thursday, a total of 20,744,105 vaccine doses had been administered in Germany as the country recently stepped up its vaccination campaign. Starting from last week, vaccine shots are not only administered at national vaccination centers and by mobile teams, but also available at general practitioners (GPs).

(The above story first appeared on LatestLY on Apr 17, 2021 10:18 AM IST. For more news and updates on politics, world, sports, entertainment and lifestyle, log on to our website latestly.com).