Amid rising tensions with Taiwan, Chinese President Xi Jinping on Tuesday told naval soldiers "to be prepared to go to war and stay alert". 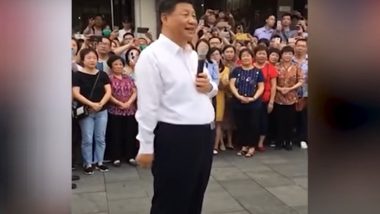 Guangdong, October 13: Amid rising tensions with Taiwan, Chinese President Xi Jinping on Tuesday told naval soldiers "to be prepared to go to war and stay alert". Xi Jinping was visiting a military base in China's Guangdong province on the north shore of the South China Sea. His statement comes amid the widening divide between Taipei and Beijing. Although Taiwan is considered as a part of China under the "one country, two systems" concept, the island enjoys de-facto sovereignty. Taiwan Rejects China's Claims of Spying; Taipei Accuses Beijing of 'Creating Terror' After Chinese Media Aired Reports on Espionage.

"(You should) focus your minds and energy on preparing to go to war, and stay highly vigilant," Xi was quoted by state broadcaster CCTV as saying. "Marines have many different missions and the demands on you will vary. As such (you) should base your training on (the need to) go into battle … and raise (your) training standards and combat ability," the Chinese President added. In veiled references to Beijing’s claims to Taiwan and the South China Sea, Xi told marines to protest Chinese territory, the country’s maritime interests and its interests overseas. Taiwan Seeks 'International Alliance' to Ward Off China Threat; A Timeline of The Historical Taipei-Beijing Divide.

Xi also toured Shantou, the hometown of many overseas Chinese. In videos shared on social media, he is seen saying that he will emphasise that China will "unswervingly follow the path of reform and opening up, and continue to build a prosperous and modern Chinese nation".

Taiwanese President Tsai Ing-wen on the occasion of the country's national day last month had said that she has hopes for fewer tensions with China and in the region, if Beijing will listen to Taipei's concerns, alter its approach and restart dialogue with the self-ruled island democracy.

(The above story first appeared on LatestLY on Oct 13, 2020 10:29 PM IST. For more news and updates on politics, world, sports, entertainment and lifestyle, log on to our website latestly.com).