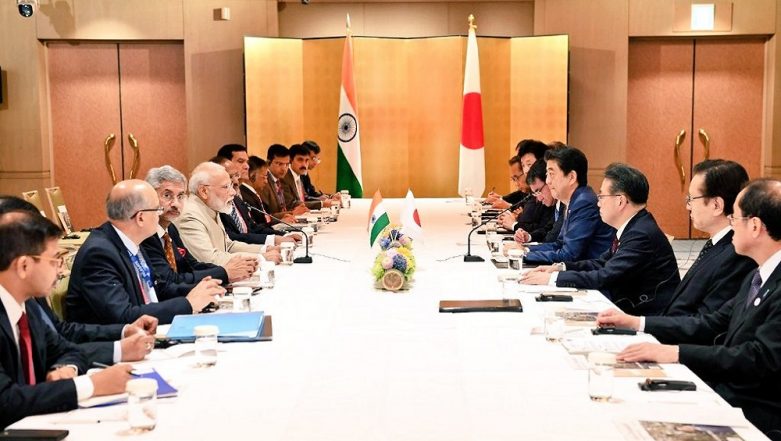 Okasa, June 27: Prime Minister Narendra Modi on Thursday held a bilateral meeting with Japanese PM Shinzo Abe on the sidelines of the G20 Summit in Osaka Prefecture in Japan. Abe congratulated PM Modi for his landslide victory in the recently concluded the Lok Sabha elections. The Japanese PM said, “Also, next time it is my turn to visit India and I am looking forward to my visit.” G20 Summit 2019 in Japan: PM Narendra Modi Welcomed by Indian Diaspora in Osaka.

PM Modi expressed gratitude for the warm welcome given by the Japan government on his arrival. The Prime Minister also thanked Abe for his congratulatory message on the Bharatiya Janata Party’s (BJP) victory in the general elections 2019.

The Prime Minister said, “Thank you once again for the congratulations, you were the first friend of India who congratulated me, on phone. I also express my gratitude for the warm welcome you and Japan Government have accorded to us.”  PM Modi also tweeted a video of the meeting. Donald Trump Calls On PM Narendra Modi Ahead of G20 Summit 2019, Says 'India Must Withdraw Increased Tariffs'.

A friendship characterised by warmth and the promise of a bright future.

Prime Ministers @narendramodi and @AbeShinzo hold talks in Osaka, the first such meeting between these leaders since the start of Japan’s Reiwa era.

Many aspects of India-Japan relations were discussed. pic.twitter.com/59CiuBHZWA

Issue of fugitive economic offenders was also discussed in the meeting. Foreign Secretary Vijay Gokhale said, "PM Abe referred specifically to PM Modi's initiative in earlier G20 meetings on the issue of fugitive economic offenders and he said that G20 should deal with this problem as part of its anti-corruption measures." Both the leader will again meet tomorrow for a trilateral meeting between Japan, India and the  United States of America.

Foreign Secretary Vijay Gokhale on PM Modi-Japan PM Shinzo Abe meet: PM Abe referred specifically to PM Modi's initiative in earlier G20 meetings on the issue of fugitive economic offenders and he said that G20 should deal with this problem as part of its anti-corruption measures https://t.co/TwnEEeafxr

The Prime Minister reached Osaka on Thursday morning to participate in G20 Summit. PM Modi was also accorded warm welcome by members of the Indian community in Japan after he arrived here for the Summit. The summit will take place between June 28 and 29. It will be PM Modi's sixth G20 Summit. On the sidelines of the Summit, he will hold bilateral talks with world leaders, including United States President Donald Trump