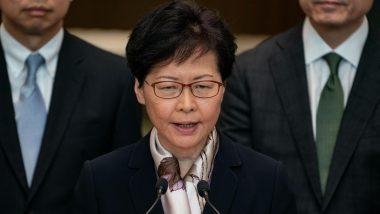 Hong Kong, July 31: Hong Kong Chief Executive Carrie Lam on Friday announced the deferment of upcoming Legislative elections due to COVID-19 surge. The polls for the Legislative council were scheduled to be held in September, but is now expected to be postponed till the year-end or early 2021.

The move is expected to further infuriate democracy supporters, who are agitated since the passage of Hong Kong National Security Law last month. The legislation has drawn flak as it allows extradition of political prisoners to mainland China, and prevents holding of demonstrations which authorities may deem as "anti-national". China Opens New Office For Security Agents to Operate in Hong Kong, A Week After Passing Controversial National Security Law in City.

Hong Kong Chief Executive Carrie Lam, in a statement issued on Friday, cited the recent spike in COVID-19 cases as the reason behind the likely deferment of polls. A day earlier, the region recorded 149 new infections, taking the overall count to 3,151.

The 70-member Legislative Council, currently being ruled by the pro-establishment party of Lam, was predicted to face a rout in the upcoming polls. The surveys so far had given the edge to the coalition of pro-democracy parties.

The polls were originally scheduled to be held on September 6. A fresh voting schedule will be released next month, Lam announced. According to experts, the elections may prove to be the last bid for pro-democracy voices in Hong Kong to safeguard the city's intruded autonomy.

A victory of the incumbent pro-establishment group may lead to further integration with the Communist China. Beijing's interference in the polling process was observed earlier this month after the Liaison office of the Communist Party of China (CPC) in Hong Kong marked its objection to the primaries organised by the pro-democracy coalition.

(The above story first appeared on LatestLY on Jul 31, 2020 04:28 PM IST. For more news and updates on politics, world, sports, entertainment and lifestyle, log on to our website latestly.com).