In the last 24 hours, Italy reported a total of 12,916 new Covid-19 cases, which took the overall tally to 3,544,957, as over half of its 20 regions turned into red zones, according to the latest data from the Ministry of Health. 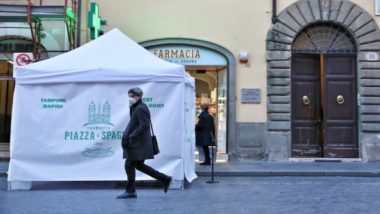 In the same period, the country's death toll rose by 417 to 108,350, while the recoveries increased by 19,725 to over 2.87 million, Xinhua news agency quoted the Ministry as saying. UK Govt to Immunise Adults First Before Sharing COVID-19 Vaccines with Other Countries.

On March 26, Health Minister Roberto Speranza signed an order designating which regions fall into which colour-coded zone, with the new rules going into effect on Monday through April 6.

In a bid to contain the new wave of the pandemic, the government late last year divided the country into three colour-coded areas -- yellow or low risk, orange or medium risk, and red or high risk -- with varying restrictions according to the level of transmission of the virus.

All these regions need to be in the red zone because they "present a weekly incidence of contagion of over 250 cases per 100,000 inhabitants", said the order.

Red zones have near-total lockdown rules, with all shops shut down except for those selling essential goods, such as groceries and pharmacies, and a ban on all social activities in public.

The rest of Italy's 20 regions remain in the orange zone, where the restrictive rules include a 10 p.m. to 5 a.m. curfew and a ban on travel outside one's municipality; bars and restaurants can operate until 6 p.m., but they can only serve takeaways.

The central Lazio region where Rome is located will become orange from Tuesday.

However, the entire country will be in the red zone over the Easter weekend, from April 3 to 5.

Speranza made the new designations based on the Ministry of Health's weekly monitoring report referred to March 15 to 21, which said that "the incidence (of the virus) at the national level is still very high".

A total of 9,499,293 people in Italy had been inoculated since a nationwide vaccination campaign kicked off in December 2020.

(The above story first appeared on LatestLY on Mar 30, 2021 01:25 PM IST. For more news and updates on politics, world, sports, entertainment and lifestyle, log on to our website latestly.com).