Japan's Next PM: Yoshihide Suga Officially Declares He Will Run For Leadership of LDP, Making Him Top Contender to Take Over From Shinzo Abe 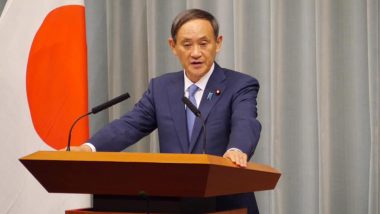 Tokyo, September 3: Japan’s Chief Cabinet Secretary Yoshihide Suga officially declared that he will run for the leadership of the ruling party Liberal Democratic Party (LDP), making him the top contender to take over from Prime Minister Shinzo Abe.

Yoshihide Suga on Tuesday cemented his place as a frontrunner in the race to become the next prime minister of Japan, however, no formal announcements were made. Shinzo Abe Resigns: What's Next For Japan? How Will Next PM be Elected? List of 5 Potential Successors.

A longtime aide to the outgoing prime minister, Suga informed reporters on Wednesday that he was entering the leadership contest to avoid a political vacuum in a time of crisis. Shinzo Abe, who was serving as the Prime Minister of Japan for the last eight years, stepped down from his position last week due to deteriorating health.

Yoshihide Suga Officially Declares He Will Run For Leadership of LDP:

Japan’s Chief Cabinet Secretary Yoshihide Suga has officially declared he will run for the leadership of the ruling party, making him the top contender to take over from Prime Minister Shinzo Abe https://t.co/TzpKpHbjBC pic.twitter.com/jORgubKuHm

The other front runners in the race for the PM are Shinjiro Koizumi, the son of Japan's one-time popular Prime Minister Junichiro Koizumi, Seiko Noda, a critic of Abe and one of the tallest women leaders of Japan and Taro Aso.

(The above story first appeared on LatestLY on Sep 03, 2020 01:11 PM IST. For more news and updates on politics, world, sports, entertainment and lifestyle, log on to our website latestly.com).