Mark Esper, US Defence Secretary, Opposes Donald Trump's Decision to Use Insurrection Act To Send The U.S. Military to Quash Anti-Racism Protests in The Country 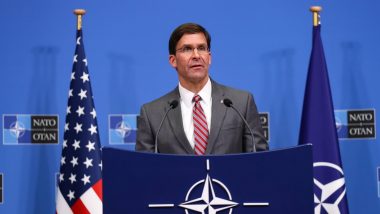 Washington DC, June 3: US Defence Secretary Mark Esper on Wednesday opposed to invoking a law that allows the president to send soldiers into American streets to quell protests triggered by the death of George Floyd. Esper said that he did not support invoking the Insurrection Act. Speaking at a press conference, the US Defence Secretary said that the National Guard was “best suited” to support local law enforcement, and that using active-duty soldiers should be a “last resort”. Distancing himself from the US President Donald Trump’s statement, Esper added that he did not support the invoking the 1807 law. Snapchat Stops Boosting Donald Trump Posts for Inciting ‘Racial Violence’.

Esper stated, “The option to use active-duty forces in a law enforcement role should only be used as a matter of last resort, and only in the most urgent and dire of situations. We are not in one of those situations now. I do not support invoking the Insurrection Act.” This puts him in direct conflict with Trump.

JUST IN: Defense Sec. Mark Esper provides his account of events Monday evening, in which peaceful protesters were forcibly dispersed ahead of Pres. Trump's photo op at St. John's Church.

The incident has drawn blistering criticism from lawmakers and local religious leaders. pic.twitter.com/S7c8X17xVZ

Hours before, the Esper’s press conference, the US President wrote “LAW & ORDER” on his Twitter. Reportedly, Trump and other top officials, including national security adviser Robert O'Brien, are "not happy" with Esper after his press conference. Meanwhile, over 1600 active-duty troops were moved the Washington area as the military is playing an increasing role in responding to anti-racism protests which turned violent in the country.

On Tuesday, Trump vowed to order a military crackdown on violent protests that are taking place in the United States. He said he was sending thousands of troops onto the streets of the capital and threatening to deploy soldiers to states. The development came a week after the death of George Floyd, an unarmed black man who was killed when a white police officer knelt on his neck in Minneapolis. Flyod’s death led to the worst civil unrest in decades in New York, Los Angeles and dozens of other American cities.

(The above story first appeared on LatestLY on Jun 03, 2020 11:40 PM IST. For more news and updates on politics, world, sports, entertainment and lifestyle, log on to our website latestly.com).