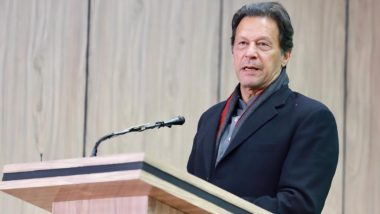 Islamabad, April 7: In a landmark judgement, the Supreme Court of Pakistan ruled on Thursday that the National Assembly Deputy Speakers ruling to dismiss the no-confidence motion against Prime Minister Imran Khan and the subsequent dissolution of the Lower House by the President on the PMs advice were contrary to the Constitution and the law of the land, Express Tribune reported. The court also ordered to reinstate the National Assembly and summon its session on Saturday to hold voting on a no-trust motion moved against Imran Khan.

A five-member bench headed by Chief Justice Umar Ata Bandial, which also included Justices Munib Akhtar, Jamal Khan Mandokhel, Ijazul Ahsan and Mazhar Alam Khan, announced the verdict, which was reserved earlier in the day. The top court also summoned the officials of the Election Commission of Pakistan (ECP), including its secretary. Earlier, during a hearing of the case, Bandial, after consultation with his fellow judges, observed that it was clear that the ruling of the Deputy Speaker to dismiss the no-confidence motion submitted against the Prime Minister was "wrong". Pakistan PM Imran Khan Urges Public To Protest Against Foreign Power.

The Chief Justice remarked that there would be no stability in the country even after the restoration of the National Assembly that had been dissolved as a result of the ruling, Express Tribune reported. Attorney General Khalid Jawed Khan argued that everyone needed to be loyal to the state. He said that he is not defending the ruling. "However, I think new elections are the only solution," he said.

(The above story first appeared on LatestLY on Apr 07, 2022 10:21 PM IST. For more news and updates on politics, world, sports, entertainment and lifestyle, log on to our website latestly.com).