Ruth Bader Ginsburg Dies: US Supreme Court Justice's Last Wish Was to 'Not be Replaced Until New President is Installed' 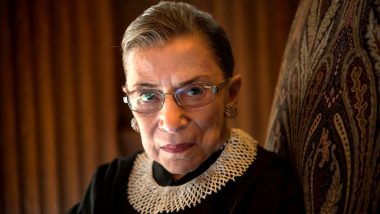 Ginsburg was also the second female US Supreme Court justice and a well-celebrated public figure in the history of the USA. As per reports, she died of complications from metastatic pancreatic cancer.

Hours after the US Supreme Court Justice's death, Senate Majority Leader Mitch McConnell vowed to bring to a vote whoever President Donald Trump nominates. However, Democratic nominee Joe Biden vigorously disagreed, declaring that "voters should pick the president and the president should pick the justice to consider." Notably, Ginsburg's death could significantly affect the US presidential elections.

(The above story first appeared on LatestLY on Sep 19, 2020 11:19 AM IST. For more news and updates on politics, world, sports, entertainment and lifestyle, log on to our website latestly.com).