Ruth Bader Ginsburg No More: Julia Roberts, Brie Larson and Others Mourn the Loss of US Supreme Court Justice 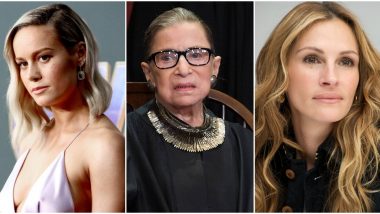 Ruth Bader Ginsburg, who was a towering women’s rights champion passed away on Friday at her home in Washington. She was 87. Ruth was also the second female U.S. Supreme Court justice and a well-celebrated public figure in the history of the USA. As per reports, she died of complications from metastatic pancreatic cancer. She was famously referred to as the Notorious RBG, for her defence of the rights of women and minorities. Ruth Bader Ginsburg, US Supreme Court Justice Dies of Cancer, Aged 87.

US politicians and Hollywood celebrities are mourning the loss of this great achiever, the one who the pioneer of women's right movement in the country. "Ruth Bader Ginsburg does not need a seat on the Supreme Court to earn her place in the American history books,” Mr Clinton had said at the time of her appointment. A well-respected figure, her loss is expected to have a certain political influence over the upcoming US elections. But until then, let's have a look at how celebs are paying their respects and offering condolences to this great figure one last time.

Gutted. RBG. 💜 Thank you for your compass. #truenorth #legend

“Women belong in all places where decisions are being made.” Thank you, Justice Ruth Bader Ginsburg. We’ll keep pushing our way into all the places we’ve yet to be invited.

"Fight for the things you care about, but do it in a way that will lead others to join you." RIP, RBG pic.twitter.com/HLtKG7qdnp

Ruth Bader Ginsburg was the kind of scholar and patriot you get excited about explaining to your kids. The kind of person who you say “who knows, one day you could be HER”. I hope you rest well, RBG, you must have been tired from changing the world.

Ginsberg's death before the elections will compel Donald Trump to think if he should replace a Republican-led Senate for her seat or simply wait until the poll results against Democrat Joe Biden is known.

(The above story first appeared on LatestLY on Sep 19, 2020 08:30 AM IST. For more news and updates on politics, world, sports, entertainment and lifestyle, log on to our website latestly.com).