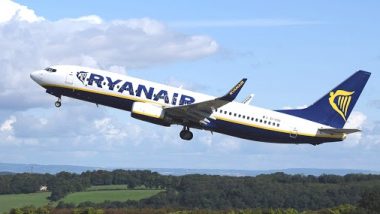 London, July 27: Ryanair, Europe's largest budget airline, on Monday announced that it has suffered a massive loss of £168 million due to the coronavirus pandemic this year. However, the airline said that it will continue flying to Spain even after UK tourists were told not to travel there. The airline further added saying that this is the 'most challenging' time in its history. “The past quarter was the most challenging in Ryanair’s 35-year history", the company said.

According to a report by Daily Mail UK, Ryanair carried just 500,000 passengers from April to June this year compared with 41.9 million in the same period last year, triggering huge losses. The report states that the airline's revenue collapsed from £2.1 billion to £113 million. Reports inform that the airlines' Chief financial officer Neil Sorahan told BBC Radio 4 that it would not cut flights to Spain, saying the schedules remain in place and the airline will continue to operate in and out of Spain as normal. Irish Airline Ryanair Cuts Up to 3,000 Jobs as COVID-19 Pandemic Grounds Aviation Sector.

Sorahan further added that the Spanish government has made clear that the country remained open for tourists, with infection levels low in much of the country. The fleet of the Dublin-based carrier was largely grounded for four months between March and the end of June after the EU governments imposed travel bans and lockdowns owing to COVID-19 coronavirus pandemic. The airline also warned about fears for a second wave in the Autumn, when the annual flu season begins.

Earlier in May, Ryanair had announced that all passengers and cabin crew on board flights will have to wear face masks or coverings when it will resume 40 percent of its flight service starting from July 1.

(The above story first appeared on LatestLY on Jul 27, 2020 02:33 PM IST. For more news and updates on politics, world, sports, entertainment and lifestyle, log on to our website latestly.com).