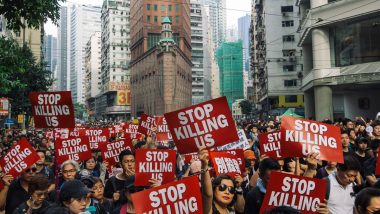 Reportedly, all searches have led users to a spam of results showing escort services among others as the Chinese government is said to be covering up the country-wide protest against its strict COVID protocol. According to reports, various cities in China have been witnessing large scale protests against the country's lockdown norms. China Censors Reference To Protest Code Words, Demonstration Hotspots Like ‘Xinjiang’, ‘Beijing’ Amid ‘Zero COVID’ Protests.

Reports also said that many of the sex bots accounts were created years but were used recently to obscure the anti-lockdown protests taking place in China. The sex bots are churning out not one or two but thousand of posts with the cities being searched online. The posting of sex adverts to curb protests news is seen as a manipulation of Twitter by the Chinese government.

(The above story first appeared on LatestLY on Nov 28, 2022 09:35 PM IST. For more news and updates on politics, world, sports, entertainment and lifestyle, log on to our website latestly.com).