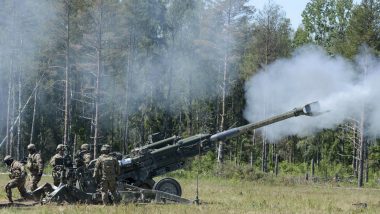 Washington, Sep 22: Low unemployment combined with a strong economy means the US Army is unlikely to meet its recruitment goal for the 2018 fiscal year, according to the military. About 70,000 have signed up so far this fiscal year, which ends September 30, meaning the Army is unlikely to meet its target of 76,500, reports CNN. "About 70,000 Americans joined the Regular Army in FY18, the most to enlist in a single year since 2010 -- and every single recruit either met or exceeded DoD (Department of Defence) standards. The Army will fall short of its 2018 recruiting goal. We made a decision to raise the quality of our recruits despite the tough recruiting environment," the Army said in a statement on Friday. Army Misses 2018 Recruiting Goal.

(The above story first appeared on LatestLY on Sep 22, 2018 02:07 PM IST. For more news and updates on politics, world, sports, entertainment and lifestyle, log on to our website latestly.com).