"It could well be that, at 10 o'clock on election night, Trump is winning in Michigan, he's winning in Pennsylvania, he's winning in Wisconsin, and he gets on the television and says, 'Thank you Americans for re-electing me. It's all over, have a good day'," Sanders had said. 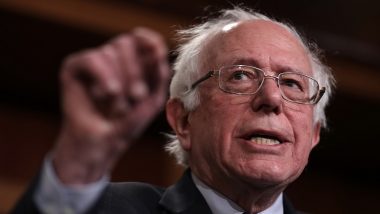 Months before the Election Day, Vermont Senator Bernie Sanders predicted the post-poll maneuvers of President Donald Trump. In an interview with a US media network, the independent lawmaker was blunt in his warning that the Democrats should prepare for a long haul even if the results favour their candidate Joe Biden.

On the Election Night, and the day that followed, Sander's prediction turned out to be accurate. Trump first went on to declare his victory, despite the counting of votes still being underway. On the following day, he demanded the counting of mail-in ballots to be stopped, followed by his legal team moving the courts. Trump Alleges 'Major Fraud', Says 'We Did Win This Election, Will Go to Supreme Court to Stop Counting'.

Sanders, in his conversation with Jimmy Fallon of The Tonight Show on October 19, had claimed that Trump would appear the winner in some of the swing states in the early counting of votes, when only the ballots dropped through in-person voting are counted.

"You're going to have the situation which I suspect in states in Pennsylvania, Michigan, Wisconsin, other states where they are going to be receiving huge amounts of mail-in ballots. And unlike states like Florida or Vermont, they're not able, for bad reasons, to begin processing those ballots until I don't know - Election Day or maybe when the polls close," he said.

After Trump would take the initial lead, he would attempt at discrediting the votes cast through mail-in ballots, Sanders had warned. He would call for the "counting to be stopped", and also move the courts seeking the rejection of mail-in ballot votes counter after the Election Day and Election Night.

What Video of Bernie Sander's Prediction on Post-Poll Chaos

So... Bernie Sanders is a wizard then?

He predicted It all! pic.twitter.com/a89eRLbaEV

"It could well be that, at 10 o'clock on election night, Trump is winning in Michigan, he's winning in Pennsylvania, he's winning in Wisconsin, and he gets on the television and says, 'Thank you Americans for re-electing me. It's all over, have a good day'," Sanders had said.

Things turned out the same as Trump, in a press conference at 2 am ET on November 4, said, "We are winning this election, infact, we have already won." He also issued a clarion call to his supporters, warning them of an "overnight election fraud" being perpetrated in Democrat-controlled states to increase Biden's numbers.

(The above story first appeared on LatestLY on Nov 05, 2020 01:02 PM IST. For more news and updates on politics, world, sports, entertainment and lifestyle, log on to our website latestly.com).