US President Donald Trump Has Ordered to Withdraw Majority of Forces From Somalia by Early 2021: Pentagon

The latest decision indicates that Trump is determined to downgrade US participation in distant wars before his presidency ends. The Pentagon last month announced US troops in Afghanistan and Iraq would be reduced to 2,500 level respectively by mid-January 2021. 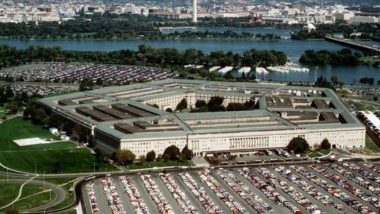 Washington, December 5: The Pentagon said that President Donald Trump had ordered to pull the majority of US military forces out of Somalia by early 2021. "As a result of this decision, some forces may be reassigned outside of East Africa. However, the remaining forces will be repositioned from Somalia into neighbouring countries in order to allow cross-border operations by both US and partner forces to maintain pressure against violent extremist organisations operating in Somalia," the Pentagon said in a statement on Friday, Xinhua news agency reported.

The statement downplayed this move as a change in US force posture rather than a change in policy. "The US will retain the capability to conduct targeted counterterrorism operations in Somalia, and collect early warnings and indicators regarding threats to the homeland," it added. The United States reportedly has roughly 700 troops stationed in Somalia to assist local forces against al-Shabaab, a terrorist group linked to al-Qaeda. Somalia: More Than 10 Somali Army Troops Killed in Ambush by Al-Shabaab.

Trump's intention to withdraw troops from Somalia has emerged in media reports for weeks. Somali President Mohamed Farmajo signalled his concern about this move back in mid-October.

"The United States military support to Somalia has enabled us to effectively combat Al-Shabab and secure the Horn of Africa. A victory through this journey and for Somali-US partnership can only be achieved through continuous security partnership and capacity building support," he tweeted.

The latest decision indicates that Trump is determined to downgrade US participation in distant wars before his presidency ends. The Pentagon last month announced US troops in Afghanistan and Iraq would be reduced to 2,500 level respectively by mid-January 2021.

Currently, there are approximately 4,500 US troops in Afghanistan, and 3,000 troops in Iraq to support Iraqi forces in battles against remnants of the Islamic State, mainly for training and advisory purposes.

(The above story first appeared on LatestLY on Dec 05, 2020 11:11 AM IST. For more news and updates on politics, world, sports, entertainment and lifestyle, log on to our website latestly.com).

Comments
Tags:
Donald Trump Pentagon Somalia United States US Forces US military US military forces
Comments
You might also like