Initial unemployment claims in the US soared to 965,000 last week, indicating severe disruption to the labor market recovery by Covid-19 spikes, according to the government. 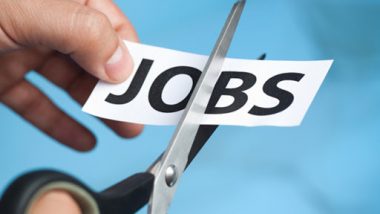 Washington, Jan 15: Initial unemployment claims in the US soared to 965,000 last week, indicating severe disruption to the labor market recovery by Covid-19 spikes, according to the government.

In the week ending January 9, the number of Americans filing for unemployment benefits jumped by 181,000 from the previous week's downwardly revised level of 784,000, according to a report released on Thursday by the Labor Department's Bureau of Labor Statistics (BLS).

Meanwhile, the total number of people claiming benefits in all programs, state and federal combined, for the week ending December 26, 2020, decreased by 744,511, but remained elevated at 18.4 million, as the country struggles to grapple with the fallout of the surging Covid-19 infections.

With the jobs recovery "stalling," the extra 300 dollars in weekly benefits provided by the recently approved $900 billion Covid-19 relief bill "could not come soon enough" for many families, she noted.

After that, the figures have been largely declining, though still at historically high levels, but the trend was reversed several times amid a resurgence in Covid-19 cases, signaling a stalled recovery in the labor market.

In the week ending August 8, 2020, the number of Americans filing for unemployment benefits dropped by 228,000 to 963,000, the first time it has dipped below 1 million since mid-March.

Yet just in the following week, the figure rose back above the 1 million mark to reach 1.1 million.

In the week ending October 17, 2020, the figure fell below 800,000 for the first time since late March, and has been largely declining in following weeks, but the trend was reversed in the weeks ending November 14 and November 21, and then in the weeks ending December 5 and December 12 amid recent Covid-19 spikes.

According to the monthly employment report released by the Labor Department last week, US employers slashed 140,000 jobs in December 2020, marking the first monthly decline in employment since April 2020.

The unemployment rate, which has been trending down over the past seven months, remained unchanged at 6.7 per cent in December, the report showed.

(The above story first appeared on LatestLY on Jan 15, 2021 10:15 AM IST. For more news and updates on politics, world, sports, entertainment and lifestyle, log on to our website latestly.com).