Why is Joe Biden The 46th President, But Kamala Harris The 49th VP of The United States? Here Is The Reason 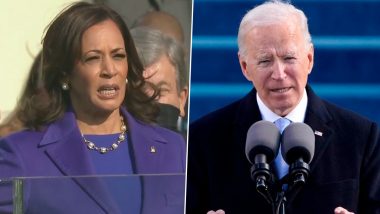 Why US Has More Number of VP’s than Presidents:

In 1933, Democratic President Franklin Delano Roosevelt took charge as the 32nd President, while John Nance Garner became his Vice President. Notably, Roosevelt served for 12 years, winning four general elections. He also led the US in World War II. The duo elected for the second time in 1936.

However, differences erupted between the two. Due to this, Roosevelt defeated Garner, who sought to become the party’s nominee for President. Roosevelt, popularly known as FDR, chose Secretary of Agriculture Henry Wallace as his running mate for the 1940 elections.

After winning the elections, Wallace became the 33rd Vice President, while Roosevelt remained 32nd President. Differences also erupted between FDR and Wallace and was later dropped at the Democratic National Convention of 1944. He was replaced by Harry Truman as VP nominee. So Truman became the 34th vice president of the country.

After Roosevelt’s death, Truman succeeded him as the 33rd President of the country. During the transition period, Alben Barkleyin became the 36th Vice President in 1949. Therefore the difference increased to three.

Biden was sworn in as the 46th President of the United States on January 20, 2021 amidst heightened security concerns. He is the oldest president in American history.Biden took the oath on his 127-year-old family Bible, which was held by his wife, Jill Biden. Meanwhile, Kamala Harris took oath as the first woman Vice President.

(The above story first appeared on LatestLY on Jan 21, 2021 05:03 PM IST. For more news and updates on politics, world, sports, entertainment and lifestyle, log on to our website latestly.com).