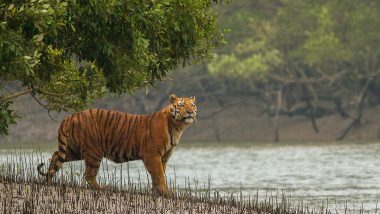 New Delhi, February 24: The Indian government has produced a report detailing conservation initiatives for many species listed on the CMS Appendices, including those added during COP13 in Gandhinagar, the Convention on Migratory Species (CMS) secretariat said on Wednesday.

Marine species are among those that benefit from new conservation measures. Being a signatory of the IOSEA Marine Turtles MOU, the government has launched a National Marine Turtle Action Plan (2021-2026) to take effective measures for the conservation of marine turtles, it said.

The endangered Ganges river dolphin or Platanista gangetica is benefitting from a concerted action adopted at the 13th meeting of the Conference of the Parties to the Convention on Migratory Species (COP13) held in Gandhinagar in February last year.

The recently launched Project Dolphin aims to strengthen the conservation of both riverine and marine dolphins. According to the report, government bodies and fishermen will be involved in the project and local communities will also participate.

A flagship species, the critically endangered great Indian bustard has disappeared from 90 per cent of its historic range. Whitetail Deer With Hairy Eyeballs in Tennessee Will Give You Chills! Here’s Why the Animal’s Cornea Is Covered in Skin Hair (See Pic).

Over the last year, the Indian government has taken steps to reduce the number of birds injured and killed in collisions with power lines. Captive breeding to increase the bird's numbers has produced first results, said the Bonn-headquartered CMS secretariat.

India is also taking concrete steps to conserve other migratory bird species, including vultures, and Amur and Saker falcons.

Ecological connectivity is essential for the functioning of animal migrations. Eco-friendly measures for linear infrastructure projects will facilitate movements of migratory wildlife and enhance their resilience and genetic diversity.

The Asian elephant, which has been accorded the National Heritage Animal status in India, is the focus of transboundary conservation efforts.

This Appendix I-listed species faces threats resulting from human-animal conflict. India and Bangladesh have agreed to ensure safety for both animals and humans through early warning systems.

Also, India has made progress in conserving the snow leopard through the Global Snow Leopard and Ecosystem Protection Program.

A community volunteer programme aims to involve young people and women in wildlife conservation and in the sustainable use of biological resources of high-altitude ecosystems.

The CMS is the only United Nations treaty that addresses migratory species and their habitats.

(The above story first appeared on LatestLY on Feb 24, 2021 04:51 PM IST. For more news and updates on politics, world, sports, entertainment and lifestyle, log on to our website latestly.com).