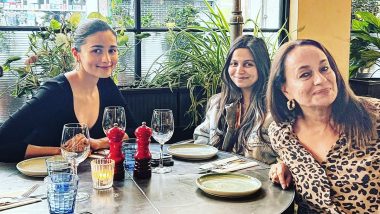 Actor Alia Bhatt, who is currently busing shooting for her Hollywood debut in London, took some time off from her hectic schedule to go out and explore different cuisines with her mother Soni Razdaan and elder sister Shaheen. On Sunday, Soni took to Instagram and dropped a picture with her daughters from their lunch date. Alia Bhatt's Mother Soni Razdan Has an Interesting Question for Those Ranting About Nepotism (Read Tweet).

In the photo which was taken at a restaurant, the trio is seen posing for the camera. While Soni is seen wearing an animal print shirt, Alia looks pretty in a black outfit. Shaheen too is all smiles for the camera. "Hello there," Soni captioned the post with a string of red heart emojis.