British actor Dan Stevens will be featuring in director Adam Wingard's follow-up to his recent hit Godzilla vs. Kong. 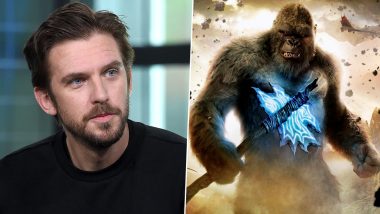 British actor Dan Stevens will be featuring in director Adam Wingard's follow-up to his recent hit Godzilla vs. Kong. The new film will be the fifth instalment of Hollywood studio Legendary's franchise MonsterVerse after Godzilla (2014), "Kong: Skull Island" (2017), "Godzilla: King of the Monsters" (2019) and "Godzilla vs. Kong" (2021). Modern Love Mumbai Review: Amazon Prime Anthology Series Has No Clear Winner But A Host Of Endearing Moments (LatestLY Exclusive).

According to Deadline, Stevens is the first actor to board the follow-up. The details of his character have been kept under wraps. Wingard will return to direct the new movie, which is expected to start production later this year in Australia. Robert Pattinson Birthday Special: From the Batmobile Chase to Escaping the GCPD, 5 of the Actor's Best Moments as Batman.

Godzilla vs. Kong featured an ensemble cast of Alexander Skarsgard, Millie Bobby Brown, Rebecca Hall, Brian Tyree Henry, Eiza Gonzalez, Julian Dennison, Kyle Chandler and Demian Bichir. In the film, Kong clashes with Godzilla as humans lure the ape into the Hollow Earth to retrieve a power source for a secret weapon to stop Godzilla's mysterious rampages. The movie had earned over USD 468 million at the global box office.