Helmed by Mrighdeep Singh Lamba Fukrey 3 stars Pulkit Samrat, Varun Sharma, Pankaj Tripathi, Richa Chadha and Manjot Singh in the lead roles. The film is all set to hit the theatres on September 7, 2023. 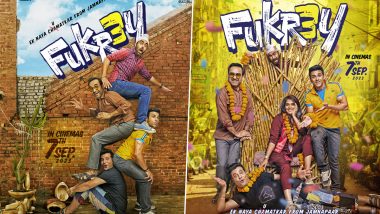 A fan commented, "Wow maza aega." "Can't wait to see choocha Bhai and pandit ji," another fan wrote. Many fans expressed their disappointment on Ali Fazal not being the part of Fukrey 3. "Zafar bhai nhi hai kya is bar," a fan wrote.

Another use wrote, "This time movie will not up to the mark as ali zafar is not a part of film."

The first part was released in 2013 and the sequel Fukrey Returns came out in 2017. Meanwhile, Varun Sharma was recently seen in the comedy film Cirkus alongside Ranveer Singh, Jacqueline Fernandez and Pooja Hegde.

Helmed by Rohit Shetty, the film failed to impress the audience at the box office.