Actor and singer Jennifer Lopez is spreading the love with her new single On My Way, which is featured in her upcoming romantic comedy Marry Me, dropped on Thursday. 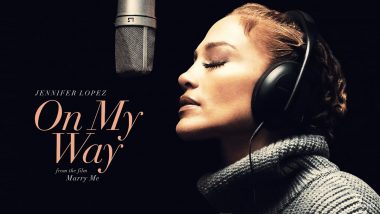 Actor and singer Jennifer Lopez is spreading the love with her new single On My Way, which is featured in her upcoming romantic comedy Marry Me, dropped on Thursday. According to People magazine, Lopez while performing 'On My Way' for the first time at Global Citizen Live in September, told fans, "This song is about pushing through old mistakes and finding your destiny ... But this is just for you guys here tonight." Bigg Boss 15: John Abraham and Divya Khosla Kumar, Antim Cast to Appear on Weekend Ka Vaar.

"I want to share this with you because I feel, I feel, what I know is that we are on our way," she continued. The performance posted on YouTube in September went viral with nearly 700,000 views. The trailer for 'Marry Me' was also released on Thursday, giving fans a glimpse at what to expect from the film, which features songs from Lopez and Latin music star Maluma. The Wheel of Time Review: Rosamund Pike’s Fantasy Series is Impressively Mounted But Ain’t The Game of Thrones Fix We Need! (LatestLY Exclusive).

In it, Lopez plays the role of Kat Valdez while Owen Wilson stars as divorced math teacher Charlie Gilbert. The two have been brought together in an unlikely romance. When music superstars Valdez and Bastian, played by Maluma, are set to get married in front of a worldwide audience, the film takes a surprising twist. Only seconds before saying "I do," Valdez discovers Bastian has been unfaithful and she decides to marry Gilbert, a stranger in the crowd.

Jennifer Lopez's Song On My Way

The trailer teases fans with an appearance by Sarah Silverman as Gilbert's close friend who encourages him to follow his heart. Marry Me also stars John Bradley, Michelle Buteau and Utkarsh Ambudkar. The film will release in theatres on February 11, 2022, as per People magazine.