Siddharth Pithani was arrested by the Narcotics Control Bureau (NCB) on May 28 this year from Hyderabad and he is currently in judicial custody. He was booked under section 27. 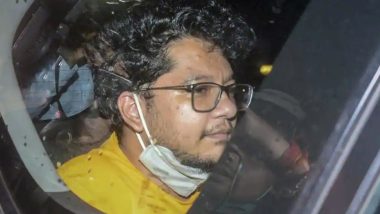 Mumbai, Dec 14 (PTI) The special NDPS court here on Tuesday denied bail to Siddharth Pithani, the flatmate of Sushant Singh Rajput, in a drugs case linked to the Bollywood actor's death in June 2020. This was for the second time that the court has denied Pithani regular bail. A detailed order of the court is not available yet. Sushant Singh Rajput’s Flatmate Siddharth Pithani’s Bail Denied by Special NDPS Court in Drugs Case.

Pithani was arrested by the Narcotics Control Bureau (NCB) on May 28 this year from Hyderabad and he is currently in judicial custody. He was booked under section 27 (A) (financing illicit traffic and harbouring offenders) of the Narcotic Drugs and Psychotropic Substances (NDPS) Act, among other charges. 67th National Film Awards: Sajid Nadiadwala Dedicates Chhichhore’s Win to Late Actor Sushant Singh Rajput (View Post).

Pithani had sought bail claiming that he had been falsely implicated and that drugs were never possessed by him. His plea stated that nothing suggesting his involvement in drug trafficking was recovered from him. The NCB launched a probe after Rajput's death following purported WhatsApp chats suggesting links between drug racketeers and some members of the film industry.

The actor, 34, was found hanging in his flat in Mumbai on June 14, 2020. The federal anti-drug agency had arrested several people, including Rajput's girlfriend and actor Rhea Chakraborty. Most of those arrested are out on bail.