Pom Klementieff Reacts to The Guardians of the Galaxy Holiday Special, Says 'We Are Going to Tell a Secret'

The present is Quill's idol Kevin Bacon, something that is not a spoiler as the trailer already shows the Hollywood star plays a fictionalised version of himself. 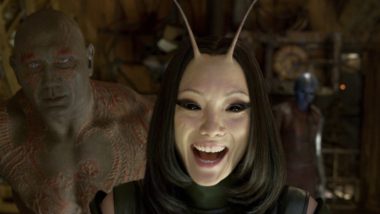 Pom Klementieff in The Guardians of the Galaxy (Photo Credits: Twitter)

Post-credits scenes are a recurring staple in the Marvel Cinematic Universe and actor Pom Klementieff says The Guardians of the Galaxy Holiday Special will be no different. The French star, popular for playing Mantis in the MCU films, said the upcoming television special will be an important inlet into the much-anticipated Guardians of the Galaxy Vol 3. Directed by James Gunn, the film is slated for a May 2023 release. Joe Jonas Reveals He Auditioned for Andrew Garfield's 2012 Film 'The Amazing Spider-Man'.

"There is a big reveal at the end of the special that is going to be also important for Guardians of the Galaxy 3. A lot of fans kind of found out about it through the years. "There were some theories online but nothing was really confirmed. Now, finally, we are going to tell the secret," Klementieff told PTI in a virtual interview, without giving any spoilers away. The Guardians of the Galaxy Holiday Special Review: James Gunn’s Marvel Presentation is a True Festive Cheer! (LatestLY Exclusive).

While protecting key plot details comes with the job, the 36-year-old actor said it's good to keep some things under wraps. "Nowadays, so many things are public. People talk so much. It's nice to keep a little bit of mystery, some secrets. Just talk about it at the right time and make it a beautiful moment instead of just lashing everything out," she added. Directed by Gunn, the holiday special will see the Guardians head to Earth in search of the perfect present for Peter Quill (Chris Pratt) to make Christmas unforgettable for him. It is set post the events that took place in this year's Thor: Love and Thunder.

The present is Quill's idol Kevin Bacon, something that is not a spoiler as the trailer already shows the Hollywood star plays a fictionalised version of himself. Bacon is consequently pursued by the other Guardians in order to cheer up Quill who is still reeling from the loss of Gamora, played by Zoe Saldana, following the events in "Avengers: Infinity War" (2018) and "Avengers: Endgame" (2019).

Klementieff revealed Gunn had shared the idea of the 42-minute-long special with her years ago. Other "Guardians" stars Dave Bautista (Drax), Karen Gillan (Nebula), Vin Diesel (Groot), Bradley Cooper (Rocket), and Sean Gunn (Kraglin) are also part of the project. "James Gunn had told me about us, the Guardians, wanting to give Kevin Bacon as a present to Peter Quill. I found this story so hilarious." The special also helped her and Bautista explore the relationship between Mantis and Drax.

The Guardians of the Galaxy Holiday Special Trailer: