Republic Day signifies the right spirit of Independent and individual India. It was on this day in 1930 when the Indian National Congress revealed Purna Swaraj, the declaration of India's independence from colonial rule. 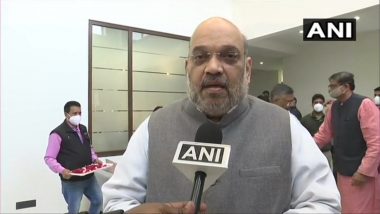 New Delhi , January 26: Union Home Minister Amit Shah, on the occasion of 73rd Republic Day, urged the countrymen to ensure their commitment to the democratic values of freedom.

Taking to Twitter, the Home Minister wished "Happy 73rd Republic Day to all" as India celebrated its Republic Day 2022 with much pomp and enthusiasm. The Home Minister also lauded the efforts of soldiers for protecting the integrity of the country. "...I bow to all the soldiers who have dedicated their lives to keep the pride, unity, and integrity of the Indian Republic intact. Let us all pledge today to ensure our commitment to the democratic values of freedom. Jai Hind!," Shah tweeted.

Republic Day celebrations are being held across the country, and the annual parade in New Delhi is the main event in which India showcases its military might and cultural diversity on Rajpath. Republic Day Parade 2022 Live Streaming: Watch Telecast of 73rd Gantantra Diwas Celebrations Online From Rajpath In New Delhi.

Apart from cultural performances by over 480 dancers from across the country, and as many as 21 tableaux, the Republic Day parade this year also features a grand 75 aircraft flypast by the Indian Air Force.

Republic Day signifies the right spirit of Independent and individual India. It was on this day in 1930 when the Indian National Congress revealed Purna Swaraj, the declaration of India's independence from colonial rule.

While India gained independence from the British Raj in 1947, it wasn't until January 26, 1950, that the Indian Constitution came into effect, and India became a sovereign state, declaring it a republic. Republic Day 2022 Wishes: PM Narendra Modi, Amit Shah, Rahul Gandhi and Others Greet People on India's 73rd Ganatantra Diwas.