In Madhya Pradesh's Ujjain, Bhasma aarti was performed in the early morning hours and prayers were offered by priests and devotees at the Mahakaleshwar temple. 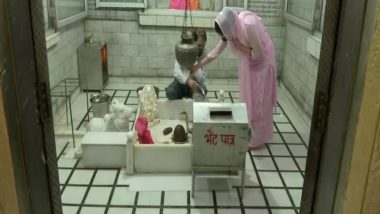 New Delhi, July 27: As compared to last year, fewer devotees visited Shiva temples across the country to offer prayers on the fourth Monday of the Hindu Sawan month due to the impact of COVID-19.

In Uttar Pradesh's Varanasi, crowds were thinner at the Baba Vishwanath Temple. "Owing to corona, fewer people are here. Earlier there used to be a large crowd but now the footfall has reduced to just 10 per cent. We are taking necessary precautions here," said one of the devotees.

Vijay Kumar Mishra, a devotee said that the all necessary health measures are being taken at the Baba Vishwanath temple. "Today is the fourth Monday of Sawan month, but due to Covid there is no crowd here. The authorities are conducting thermal scanning of those entering the temple, and ensuring that social distancing is maintained. Sawan Somvar Vrat 2020 Wishes and HD Images: WhatsApp Stickers, Facebook Messages, GIFs, and Greetings to Share on This Monday and Worship Lord Shiva.

Everyone here is wearing a mask and maintaining physical distancing."Pappu Tiwari, a member of the Gangotri Seva Samiti, Varanasi said, "There used to be big crowds earlier, but this year due to the fear of corona, fewer people are turning up. A large number used to take dips in the holy waters, but now people are afraid to do so." Meanwhile, in Meerut prayers were offered at the Augarnath Temple in the morning as devotees observed the fourth Monday of Sawan month.

In Madhya Pradesh's Ujjain, Bhasma aarti was performed in the early morning hours and prayers were offered by priests and devotees at the Mahakaleshwar temple.

Bharat Sharma, a priest at the temple said that usually over 2,000 people participate in the Bhasma aarti in the Sawan month, but this year due to pandemic, their participation has been restricted. They can only take darshans from a distance from 5.30 am to 9 pm. The Mahakal Temple Committee has arranged for 10,000 devotees to have darshan daily, he added.

"Today we celebrated the fourth Monday of Sawan month by performing Bhasma aarti according to our traditions and offered prayers. We also prayed for the recovery and good health of Chief Minister Shivraj Singh Chouhan as he has tested positive for coronavirus," said Sharma.

"There is a tradition of taking out the procession of Baba Mahakal on Monday, and so it will be held in the evening. It is believed that King Mahakal goes on a city tour to know the condition of his subjects. However, due to the corona crisis, the devotees won't be able to participate in the procession. The route has also been changed and shortened. Devotees will be able to watch it only through mobile apps and live TV broadcasts," he added.

In Delhi, priests performed rituals and offered prayers at Prachin Shiva Temple in Connaught Place and Gauri Shankar Temple in Chandni Chowk on Monday. Priests have said that health norms such as social distancing are being maintained by all.

"Owing to corona, fewer people are coming. We are ensuring social distancing and for that, only two to three people are allowed inside the temple at a time," said Anand Joshi, a priest at the Prachin Shiva Temple.

On the other hand, people violated social distancing norms and other precautions at the Gauri Shankar Temple. A large number of people were seen without face masks.

"In order to stay safe, it is necessary to maintain social distancing. Here at Gauri Shankar Temple devotees always maintain physical distancing but since today is Monday, no one is listening. To stay safe, people must follow health norms given by the Prime Minister," said Raman Kumar, a devotee.

Shravan, the fifth month in the Hindu calendar, is considered to be the most auspicious month of the year. It is dedicated to Lord Shiva who, according to Hindu religious beliefs, is the creator, preserver, and destroyer of this universe.

While Lord Shiva is worshipped on Mondays throughout the year, Mondays during this particular month are considered highly significant and auspicious. The festival is celebrated predominantly in the North Indian states.

It is believed that on "Sawan ke somwar" (Mondays falling in the month of Shravan), devotees observe a special fast and visit Shiva temples.

As per the Hindu calendar, the Holy month of Saawan began on July 6 which will go on till August 3.