Singh further informed that he created a list of 309 items which will not be bought from other countries after a certain time for which the process has already started. 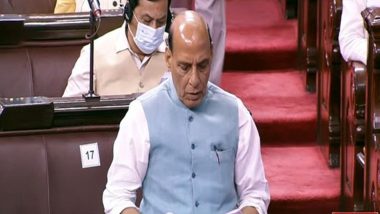 Singh further informed that he created a list of 309 items which will not be bought from other countries after a certain time for which the process has already started. "India is now respected in the world. Indian residents in other countries have told me they now feel respected. Earlier, in international conferences, if Indians said something, nobody heard. Now, the whole world listens with attention," he added. COVID-19 Pandemic, Russia-Ukraine War Behind Price Rise, Says Defence Minister Rajnath Singh.

He also lauded the Bharatiya Janata Party (BJP) saying that it is now the world's biggest party which do politics to form the country, not only the government. "You must not forget whose members you are. BJP isn't just the country's but the world's biggest party now. The ideology via which we started our journey shows we do politics not just to form the government but to form the country," Singh said. Rajnath Singh Launches Indian Navy Warship INS Surat, INS Udaygiri in Mumbai.

Targetting the previous governments for the country's development, Singh said that people faced basic problems earlier. "Congress ruled for a long time, others did too. Poverty, unemployment- basic problems were faced by people several years after independence. Don't say we've solved it all, but his (PM Modi's) work is now visible on the ground," he added.