"We have been demanding a bridge over the river so that the residents do not have to face hassles in the event of flooding and heavy rains while carrying out a funeral procession," said Sandip Pachange, gram panchayat secretary, Pitapur village. 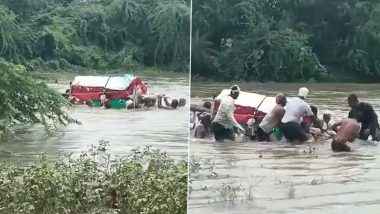 A screengrab of the video

Pune, Aug 9: In the absence of a bridge, residents of a village in Maharashtra's Solapur district were forced to undertake a dangerous journey wading through a swollen river to bury a man as the village doesn't have a graveyard.

A video of the funeral procession of Pitapur village resident Noor Ahmed (48) being carried out by people wading through the flooded Harna river on Tuesday has gone viral on social media.

The village, located in the Akkalkot tehsil, has a sizable Muslim population. As the graveyard is located on the other side of the river, the villagers had no option but to enter the swirling waters of the river to bury the dead.

"We have been demanding a bridge over the river so that the residents do not have to face hassles in the event of flooding and heavy rains while carrying out a funeral procession," said Sandip Pachange, gram panchayat secretary, Pitapur village. Maharashtra Cabinet Expansion: CM Eknath Shinde, Devendra Fadnavis’ All-Male Cabinet Has 18 Ministers, Three Tainted.

Speaking about the incident, he said family members of Noor Ahmed decided to carry out his funeral procession wading through the swollen river.

"Empty barrels were tied to the bottom of the bier so that it doesn't sink while crossing the river. The funeral procession crossed the river with the help of some good swimmers," said Pachange.

Acknowledging the hardship faced by villagers, he said, "Normally, rain activity in the Akkalkot region is not that high but the area recently received heavy rains, which flooded the river".

He said family members of Ahmed, who died on Monday, decided to wade through the flooded river as the body cannot be kept for a long time.

Khude said local MLAs and people's representatives have been following up on the demand for the construction of a bridge on the river.

"As per the information available to me, two Kolhapur-type barrages are proposed on this river which will be constructed in the coming days," the BDO said, adding that people will be able to cross the river without any hassles.

Khude said as a temporary way out, the administration has asked villagers to try to convince any resident to donate land in the village for a burial ground.

"If someone is ready to give away a land for the burial ground, we can put up the proposal before the administration and get it approved and can give required facilities," he said.