Prime Minister Narendra Modi on Monday said as the virus is being detected in several states, and poultry farms, zoos, water bodies will have to be constantly monitored to control the spread of the bird flu. 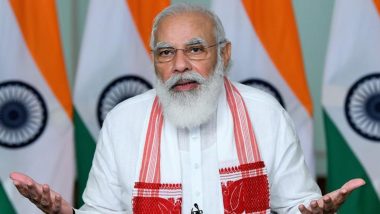 New Delhi, January 11: In view of the spread of bird flu across the country, Prime Minister Narendra Modi on Monday said as the virus is being detected in several states, and poultry farms, zoos, water bodies will have to be constantly monitored to control the spread of the disease. "Bird flu has been confirmed in Kerala, Rajasthan, Himachal Pradesh, Gujarat, Haryana, UP, MP, Delhi and Maharashtra. What Is Bird Flu? Which States Have Been Affected by Bird Flu in India? All FAQs on H5N1 Avian Flu Answered Here.

Poultry farms, zoos, water bodies have to be constantly monitored to control the spread of bird flu," said Prime Minister Modi while interacting the chief ministers of the all the states ahead of the first phase of the nationwide COVID-19 vaccination programme. This comes as 10 states have so far reported confirmed cases of bird flu in the country. Prime Minister Modi also asked all states to remain on alert to contain the spread of the disease. Bird Flu in India: All You Need To Know About H5N1 and H5N8, the Avian Flu That Has Killed Many Birds in Several States.

"To tackle bird flu, an action plan has been prepared by the Animal Husbandry and Dairying Husbandry ministry, which we need to follow judiciously. District magistrates will play a major role in the fight against the virus. All those states which have so far not reported any cases of bird flu will have to stay alert," he added. Prime Minister further asked the state governments to ensure that no misinformation is spread about the disease.

According to the Ministry of Fisheries, Animal Husbandry and Dairying, states have been requested to build awareness among the public and avoid the spread of misinformation. States/ UTs have been requested to increase surveillance around water bodies, live bird markets, zoos, poultry farms, along with proper disposal of carcass and strengthening of bio-security in poultry farms.

"Secretary DAHD requested State Animal Husbandry departments to ensure effective communication and coordination with health authorities for close vigilance of the disease status and avoid any chances of humans contracting it," the ministry said.