The analysis was repeated in England and Italy with the same results, according the researchers. 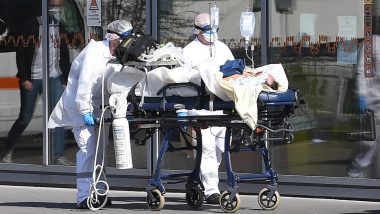 New Delhi, April 9: Increased exposure to the sun's rays -- specifically UVA -- is associated with fewer deaths from COVID-19, an observational study suggests. Researchers from the University of Edinburgh in the UK noted that increased sunlight exposure could act as a simple public health intervention if further studies establish it causes a reduction in mortality rates.

The study, published in the British Journal of Dermatology, compared all recorded deaths from COVID-19 in the continental US from January to April 2020 with ultraviolet (UV) levels for 2,474 US counties for the same time period.

The team found that people living in areas with the highest level of exposure to UVA rays -- which makes up 95 per cent of the sun's UV light -- had a lower risk of dying from COVID-19 compared with those with lower levels. The analysis was repeated in England and Italy with the same results, according the researchers. Johnson & Johnson in Talks With Indian Govt for Clinical Study of Janssen COVID-19 Vaccine.

They took into account factors known to be associated with increased exposure to the virus and risk of death such as age, ethnicity, socioeconomic status, population density, air pollution, temperature and levels of infection in local areas.

The experts noted that the observed reduction in risk of death from COVID-19 could not be explained by higher levels of vitamin D. The study included only areas with insufficient levels of UVB to produce significant vitamin D in the body.

One explanation for the lower number of deaths, which the researchers are following up, is that sunlight exposure causes the skin to release nitric oxide.

This may reduce the ability of SARS CoV-2 virus, that causes COVID-19, to replicate or reproduce, as has been found in some lab studies, they said.

The researchers explained that as heart disease is a known risk factor in dying from COVID-19, this could also explain the latest findings. They said due to the observational nature of the study it is not possible to establish cause and effect, adding however, it may lead to interventions that could be tested as potential treatments.