According to a recent study, wide-scale public attention to the song '1-800-273-8255' by American hip hop artist Logic was associated with an increase in calls to the US National Suicide Prevention Lifeline and a reduction in suicides. 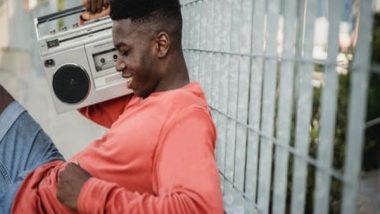 Washington, December 19: According to a recent study, wide-scale public attention to the song '1-800-273-8255' by American hip hop artist Logic was associated with an increase in calls to the US National Suicide Prevention Lifeline and a reduction in suicides.

The study findings were published in the Christmas issue of The BMJ. They demonstrate the protective effect of positive media stories about suicidal thoughts and help-seeking behaviour, particularly for groups that are hard to reach with traditional messaging, say the researchers. Also Read | TikTok to Launch Delivery Service With Food From Viral Videos in US.

There is clear evidence that media reports of suicide can trigger further suicides, but less is known about the protective effects of reports of hope and recovery, mainly because they receive much less media coverage than stories of a suicide death. Also Read | Newcastle United vs Manchester City, Premier League 2021-22 Free Live Streaming Online & Match Time in India: How To Watch EPL Match Live Telecast on TV & Football Score Updates in IST?.

One exception was in April 2017, when the American hip hop artist Logic released his song '1-800-273-8255', prominently featuring the number of the US National Suicide Prevention Lifeline.The song describes someone in a suicidal crisis who calls the number for help, which marks a turning point towards improvement and mastery of their crisis.

The song reached number three in the US Billboard charts and was performed at the 2017 MTV Music Awards and the 2018 Grammy Awards, generating intense public attention.

To assess whether the song's positive message was linked to a change in behaviour, researchers led by Thomas Niederkrotenthaler at the Medical University of Vienna examined the associations between Logic's song and daily calls to the National Suicide Prevention Lifeline number as well as daily suicides in the US.

Using Twitter posts to estimate audience attention over one month, they found that, in the 34 day period immediately after the three events with the strongest public attention (the song's release, the MTV Video Music Awards 2017, and Grammy Awards 2018), there were an extra 9,915 calls to the National Suicide Prevention Lifeline, an increase of 6.9 per cent over the expected number.

Over the same period, there was a reduction of 245 suicides or 5.5 per cent below the expected number. This is an observational study, so can't establish cause, and the researchers point to some limitations. For example, it is unclear if the song had any effects beyond the periods of largest attention, and social media data might not fully capture how many people listened to the song.But they were able to account for several potentially influential factors, and findings were largely unchanged after further analyses.

As such, they say these findings "emphasise the potential population health benefits of working creatively and innovatively with other sectors, such as the music and entertainment industries, to promote new impactful stories of help-seeking that resonate with broad audiences, leave a visible footprint on social media, and are safe in terms of not featuring potentially lethal actions but rather coping and mastery of crisis."

"Interventions that follow these principles could help create behavioural change to increase help-seeking and prevent suicide," they add. This study further supports the Papageno effect - the theory that media reports of an individual overcoming a suicidal crisis are protective against suicide, writes Alexandra Pitman at University College London, in a linked editorial.

She says further work is needed to help us understand the intervention's likely mechanism of action, but until then, she welcomes the commitment of key cultural influencers "to help amplify public health interventions intended to strengthen protection against suicide in specific vulnerable groups."