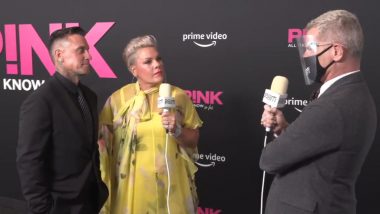 Ahead of the premiere of the documentary Pink: All I Know So Far, American singer-songwriter Pink, at the premiere of the Hollywood Bowl, discussed the possibility for a Lady Marmalade reunion. According to Variety, the 42-year-old songstress told Marc Malkin, "I want to see the reunion with all the young girls now. I never say never about anything. All the fun stuff that's happened in my life has been almost by accident." All I Know So Far Teaser: Pink Welcomes You Into Her World As She Tries To Find A Balance Between Her Music Career and Her Super Adorable Kids (Watch video).

The 2001 version of singer Patti LaBelle's 'Lady Marmalade' became a fan favourite from the 'Moulin Rouge' soundtrack. In the music video, the powerhouse group donned burlesque-inspired looks in line with the theme of the movie, which took Pink some time to get used to. "I was not happy about my outfit. I did not want to be in booty shorts, but I got into it. Cameras started rolling and I started feeling myself. Now I look at it and I'm like, 'Oh my god, that body. Why didn't I appreciate it?'" Pink said. Singer Pink to Be Honoured With the Icon Award at Billboard Music Awards.

As reported by Variety, one thing that 'Cover Me In Sushine' singer might not be up for again is playing spin the bottle with 'Lady Marmalade' collaborator Christina Aguilera. As they reminisced about her career, Malkin recalled Pink's birthday party in New York City, where the two pop stars shared a kiss. "When I was painted instead of a shirt? Was is that one? Yes, she kissed me. That was a fun party," Pink remembered.

Pink remembers playing spin the bottle with Christina Aguilera: "She kissed me. That was a fun party" pic.twitter.com/4WW9qnw1t1

Despite the happy memory, she shut down a future recreation of the kiss.

"Nope, I have a 9-year-old dude," she said, laughing at what her daughter would possibly say: "Is mommy kissing Christina?" Variety reported that 'Pink: All I Know So Far,' which chronicles the singer's life on the road up to her first performance at Wembley Stadium in England, hits Amazon Prime on May 21.