Ranveer Singh on His TV Debut The Big Picture: Decision to Host the Show is Independent and Not Because Theatres Were Shut

Actor Ranveer Singh on Wednesday said his decision to make TV debut as a host with The Big Picture had nothing to do with the prevailing situation of the Hindi film industry where movies were not releasing theatrically due to the coronavirus pandemic. 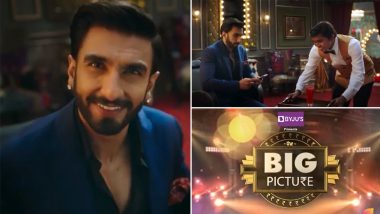 Actor Ranveer Singh on Wednesday said his decision to make TV debut as a host with The Big Picture had nothing to do with the prevailing situation of the Hindi film industry where movies were not releasing theatrically due to the coronavirus pandemic. Singh said even as theatres across the country were shut due to the pandemic last year and later opened in phases, his film work wasn't halted.  Bigg Boss 15: Afsana Jokes About Having an Evil Spirit Inside Her Who Wants to Kiss Shamita Shetty (Watch Video).

"This decision (to debut on TV) didn't have anything to do with the fact that films weren't getting screened. I shot films, including Rohit Shetty's 'Cirkus', throughout the first and the second lockdown. That work was on. "But this was an independent decision, not because 'Oh that is not happening, so let me do this.' This was a clear decision based on the format which excited me. We are onto something good," the actor told reporters.  Pranitaa Pandit Feels Competition Is Intense in Showbiz, Says 'Only the Fittest Wil Survive'.

He was speaking at a press conference for the upcoming quiz show, which will start airing on Colors from October 16. With theatres finally opening up in the country, the industry will get some respite, Singh said. "It has been a difficult phase for the film industry. Theatres were shut for so long. But the good news is that they will finally open. I'm excited, grateful. "For our film people -- producers, exhibitors, distributors, anyone connected to the showbiz -- who had to face a tough time, things are looking up," the 36-year-old actor said.

Recently, the Maharashtra government allowed reopening of cinema halls from October 22, opening the floodgates for the announcements of release dates of various Hindi films. Singh himself has three releases lined up, starting with "Sooryavanshi", scheduled to hit the screens during Diwali, followed by cricket drama "83" on Christmas and Yash Raj Films' "Jayeshbhai Jordaar" for February 2022. "The Big Picture" will feature contestants answering visual-based questions to win the grand prize money.

Singh said the show has brought in with itself an "exciting opportunity" on a personal front as he will get to showcase the audience another "skill set" -- that of a host. The actor said he was constantly getting offers to come on TV for years but "somehow, something wasn't working out". "Either the format wasn't that good, it felt like I've seen it before or I felt hosting would be too early for me. "But with this show, all the stars were aligned. I couldn't say no, the format was so new and I instantly felt like I had to do it," he added.