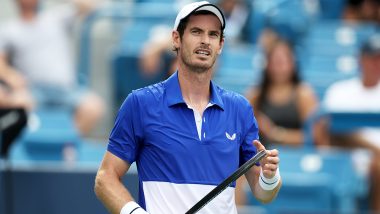 Florida, January 1: Former World No.1 Andy Murray has withdrawn from the season-opening Delray Beach Open slated to be played in Florida. Murray has pulled out of the showpiece event to reduce the risk of contracting coronavirus ahead of the Australia Open.

"After much deliberation with my team I've decided not to travel to play in Delray Beach," Murray said in an official statement. "Given the increase in COVID rates and the transatlantic flights involved, I want to minimise the risks ahead of the Australian Open. I'm really thankful for the understanding of the tournament and I look forward to playing there soon," he added.

"We welcome Andy back to Melbourne with open arms. As a five-time finalist he has been an integral part of so many amazing matches and storylines in the recent history of the Australian Open," said Australian Open Tournament Director Craig Tiley in an official statement. Sam Querrey Given Suspended Fine of $20,000 with Six Months Probation for COVID-19 Protocol Breach.

"His retirement was an emotional moment and seeing him come back, having undergone major surgery and built himself back up to get onto the tour again, will be a highlight of AO 2021," he added. Australian Open will take place at Melbourne Park from February 8-21 and will feature singles, doubles, and wheelchair competitions.