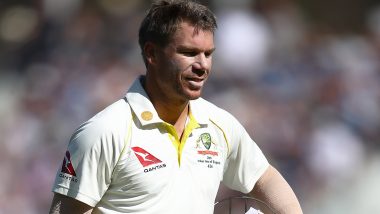 The four-match series between India and Australia currently stands levelled at 1-1 and the third Test is slated to be played at the Sydney Cricket Ground from January 7. Regular openers David Warner and Will Pucovski were both injured and the duo had to miss the first two Tests against India. India vs Australia 3rd Test 2020 Preview: Likely Playing XIs, Key Battles, Head to Head and Other Things You Need to Know About IND vs AUS Match in Sydney.

"Very hopeful that David will be ready for the third Test, he is a bit of a warrior, isn't he? I have said this since day one that he is doing everything possible to be ready for the third Test, he looks like he is moving very well, he is very determined to play, he loves the competition and he loves playing Test cricket, we will get some final eyes on him this afternoon during training and we will make a discussion on that. He is looking very likely to play the Test match," said Langer during a virtual press conference on Tuesday.

"David has played a lot of white-ball cricket recently, a bit like Steve Smith, David probably has not played any four-day cricket for probably 12 months now. He is a master of the game and his experience will help him through that," he added.

Further talking about Warner' ability to run fast between the wickets, Langer said: "I think David Warner's batting will be fine, there might be some different movements he might need to make in the field, so we might him get into the slips, I still remember some brilliant catches he took in Leeds in 2019 Ashes, he is a such a natural talent, he is going to be playing with some pain and like a lot of cricketers, you play through some levels of pain, he is willing to take that on and hopefully, it won't hamper too much."

"If we thought if are taking a big risk of injuring Warner again, we would not be taking the risk. He has had a good rehab, he might be a little restricted in the field, that area might get a little bit fatigued as he has not played Test cricket for a while but we will not risk if we thought he is going to re-injure himself back again," added Langer.

Langer also confirmed that Pucovski has been cleared by neurologists after the batsman was hit on the head in a practice game against India A. The coach said that the opening batsman has recovered from a concussion and he will be available for selection for the third Test.

Warner and Pucovski were named in Australia's updated Test squad for the remaining two Tests last week. Australia opener Joe Burns, who failed to perform, was released and he then joined the Brisbane Heat outfit for the Big Bash League (BBL).

Both the Indian and Australian lineups moved to Sydney on January 4. On January 2 and 3, the teams had trained in Melbourne only.

The third Test of the Border-Gavaskar Test Series between India and Australia will be telecasted Live and Exclusive on Sony Six, Sony Ten 3 (Hindi), and Sony Ten 1 channels from January 7, 2020, 5.00 am onwards. India had levelled the four-match series against Australia after securing an eight-wicket win in the Boxing Day Test.