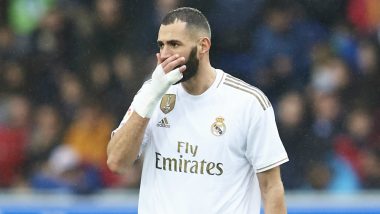 Madrid, July 9: Real Madrid's Karim Benzema on Wednesday completed 11 years in the club. The French forward had arrived at the club on July 9, 2009. The player has developed many folds since joining Real Madrid and is the fifth-highest goalscorer in the club's history with 244 goals. Throughout the last 11 years, he has made 508 appearances and clinched 18 titles.

His debut for Real Madrid came on August 29, 2009, against Deportivo. A short time later, he picked up his first goal in a LaLiga clash with Xerez, on his way to collecting quite a remarkable trophy haul made up of four European Cups, four Club World Cups, three European Super Cups, two LaLiga titles, two Copa del Rey trophies and three Spanish Super Cups.

Benzema is not only known for his goal-scoring exploits but also for his link-up play with his teammates on the pitch. The latest example of his selfless efforts was the sublime back-heeled assist he provided for Casemiro to net in the clash with Espanyol. Real Madrid currently hold the top place in the La Liga table with 77 points, just a point ahead of Barcelona.